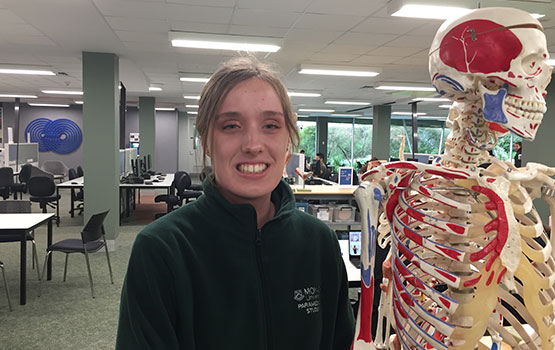 Passionate about emergency care, first year paramedicine student Lauren Brewer has been a volunteer with the Country Fire Authority (CFA) for the past six years.

“At 12 I joined my hometown’s junior fire brigade program, and when I turned 16 I did my bush fire training and qualified as a firefighter,” says Lauren. “From there I did more training such as hazmat awareness, internal structural firefighting and breathing apparatus training.”

Following in the footsteps of her grandfather and father, Lauren’s love for emergency care led her to the Bachelor of Paramedicine at Peninsula campus.

“Monash had everything I wanted. I’m from Warragul and the Peninsula campus has great student accommodation so I live on-campus during the week and go home on weekends to volunteer and see my family. The structure of the course units also attracted me and I really like that we have core subjects.”

As a trained breathing apparatus structural firefighter, Lauren has already had her share of emergencies.

“My Dad and I attended a house fire where we had to go into a burning house to look for a lady apparently trapped inside. The roof collapsed on us and paramedics treated us at the scene. Luckily, we both came out uninjured (but a little shaken!). After talking to the paramedics on scene I thought the job was something I could do. It got me thinking about that as a career.”

Despite being a first-year student, Lauren has already been able to put her new emergency care skills into practise.

“Driving home one night I was first on scene at a bad car accident, and it was through my acquired CFA knowledge and paramedic course skills that I was able to help out. I also responded to an ‘undefined fire’ that turned out to be a lady who had accidently set herself on fire with a cigarette after she fell asleep holding it. Although it was an awful situation, it was good that I was able to recognise what the paramedics on scene were doing and be able to assist them. I’ve only been doing the course for 7 months and it was amazing that I was able to relate to what the paramedics were saying. I was actually a little bit useful!”

As well as enjoying the practical aspects of her course, Lauren says the support of her teachers at Peninsula campus has been amazing.

“I give my highest regards to our anatomy teachers, they are fantastic and so switched on,” she says. “I love the structure of these classes as well. We get weekly online videos and have a flipped classroom structure. You watch the lectures online and then follow up with two tutorial classes to clarify the information. It’s a great way to learn course work.”

With this being her first time living away from home, Lauren admits she was initially nervous about coming to Monash but made friends easily.

“Everyone is like-minded here and I feel like I have a new family. We have all bonded over our similar passions and are all equally enthusiastic. I feel excited to study and become a paramedic even though there is a lot of coursework.”

Lauren says her advice to future paramedic students is to be aware that you are going to be working with people 24/7. You need to go into the course knowing it’s your passion and it’s what you want to do as a career. She also adds that it’s also a good idea to take biology in year 12.

Find out more about the Bachelor of Paramedicine