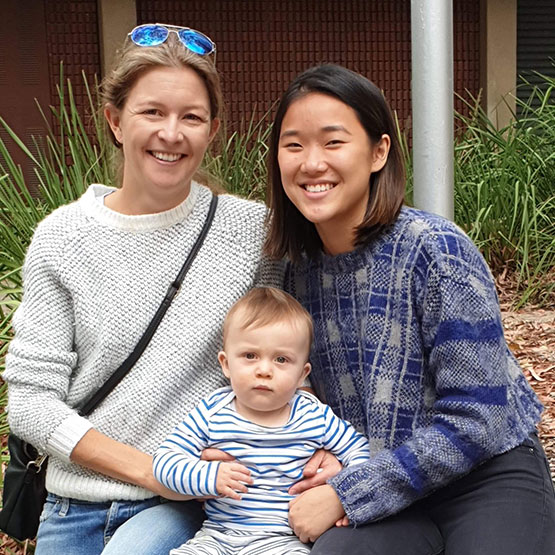 Andrea Tan (pictured right) is a fourth-year Bachelor of Nursing and Midwifery student hailing from Malaysia. As part of her double degree course based at Peninsula campus, she's required to complete 10 "Follow Through" experiences, where she follows a woman through her antenatal, birth and postnatal journey.

Midwifery students typically have to themselves seek out and enlist a pregnant woman to complete their Follow Through experiences.

After approaching almost every potential subject in the local shopping centre, only to find they'd already been signed up by another student midwife, Andrea was put in touch with Amy Little, a Monash University student recruitment coordinator who was in her 20th week of pregnancy (pictured left).

“I’m a volunteer with Aquila College, and luckily one of our coordinators knew Amy and referred me,” said Andrea. “Amy is my ninth 'Follow Through', and I accompanied her to almost every pregnancy appointment. I was also there for a long time during her labour.”

Amy gave birth to a healthy baby boy, Archie, ten months ago, and speaks highly about Andrea’s support and knowledge throughout her pregnancy and labour.

“It was amazing to have Andrea with me throughout my pregnancy. The support midwifery students like Andrea provide is invaluable and so reassuring, particularly during my long labour. Andrea was so kind and caring."

Andrea developed a very strong and supportive relationship with Amy.

“One of Amy’s strengths was that she was already very knowledgeable about pregnancy. In a way, I felt like we were bouncing off each other with that knowledge. Despite this being Amy’s first pregnancy, she knew a lot about different techniques for giving birth, so it was great that I could also ask her questions. We built a really good bond.”

Learning to build rapport with a patient is an essential skill that Andrea will certainly take away with her after finishing her studies.

“Learning clinical skills is obviously an important thing,” she says. “But forming that initial rapport with your patient and learning to communicate well with them is just so important, because you have to create trust. If you have trust, your patient will absorb the information you're giving them, and they'll also be more open to you in what they're thinking and feeling. That’s a really important skill. ”

Andrea’s double-degree course in midwifery and nursing means that throughout her four years of study, she'll complete 1600 hours in placements.

She's spent most of her midwifery placements in the maternity unit at Frankston Hospital; it's conveniently close to the campus and also where she lives.

“As an international student you get used to walking and using public transport," she says. "It’s fine, though, as there are really good things about studying at Peninsula campus – most of my placements have been nearby, and I love being near the beach and nature. I really enjoy the outdoor vibe!”

Andrea did plenty of background research before leaving Malaysia to come to Monash. “Compared to other universities, I really liked Monash’s values and its reputation.”

She says she’s always felt the need to help people, and would like to combine travel with work in both a midwifery and nursing capacity.

“I want to use my knowledge to share with other people and create a positive environment. If I can be part of that in a small community, then I’m sure it can have a domino effect in the wider world.”

Andrea’s future plans include specialising in neonatal intensive care, and she'd also like to join Médecins Sans Frontières, aka Doctors Without Borders.