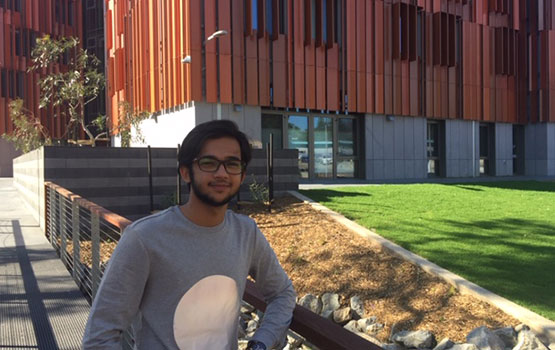 So far living on campus has been a much more positive experience than first year Bachelor of Business Administration student Ali Mujtaba first thought it would be.

“I didn’t really know what to expect,” said Ali. “This is my first time living in Australia and I thought it would take a long time to meet people.”

To Ali’s surprise, making new friends happened almost instantly. As part of the Gillies Hall orientation program, Ali attended a welcome event in the new common room and was introduced to other new residents.

“I first met Grace, my Resident Advisor. She handed me a coloured t-shirt and explained that each floor in Gillies Hall becomes a team. The teams compete against each other in various activities on campus and earn points throughout the year. It encourages friendly competition amongst the Gillies Hall residents and made making friends really easy.”

Ali says that not only is there social support living in Gillies Hall, there is also academic support too.

“If I need help with an assignment I’ll see someone from my course and arrange to meet them in the common room. It’s really easy to find someone that can help you.”

As well as academic support from peers, Ali says the lecturers and tutors at Peninsula campus are always on hand to help.

“Two hours before a deadline I forgot something really important and it was late at night,” said Ali. “I had to add in an abstract and I was quite confused. I emailed my professor that night and he replied! That saved me, it was amazing.”

Ali adds that the Peninsula campus library staff are also a great resource.

“Monash use a style of report writing that I wasn’t used to using. The library staff showed me what to do, it was really helpful.”

In the future, Ali would like to follow his father’s footsteps by carving out a career in business.

“I would like to do something in construction,” he says. “In India, there’s a big demand for housing and I would like to develop more houses, as well as roads and buildings.”

Studying the BBA is a providing Ali with the opportunity to learn about the management strategies used throughout large organisations. He says as the course is practical and based on real life examples he’s learning to understand how companies operate.

Ali’s advice to future students thinking about coming to Peninsula campus to study is that no matter what, someone will be there for you whether it be a teacher or a friend.

“Sometimes people think that at university no one will care if you pass or fail. That’s not the case at Monash and one of the best things about being at Peninsula campus.”