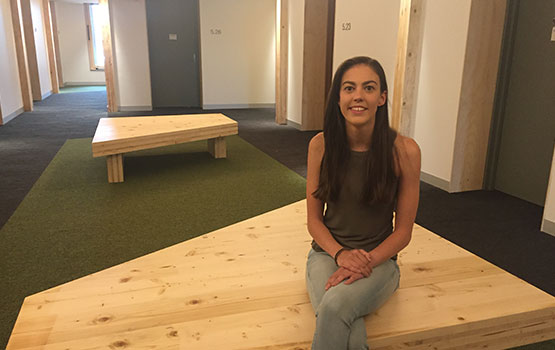 Originally from the UK, Lorna Martin moved to Australia specifically to study at Monash. Currently in the second year of her Paramedicine degree, Lorna felt that a degree from Monash would offer her more career prospects compared to what she could gain in the UK. Since arriving in Australia Lorna has lived on campus at Peninsula.

“It was a bit daunting moving to Australia so I decided to live on campus as a way to make friends. Originally I lived in a flat with eight bedrooms in the student village but have now moved to Gillies Hall. I love living on campus, it has a real community vibe and it helped get rid of my nerves straight way.”

She continues, “I also love Peninsula campus. Even when it’s bustling with students during the day it still has a nice tranquil relaxed vibe.”

Lorna enjoyed living in the student village but says it’s lovely having her own studio apartment at Gillies Hall, and the new communal areas give students the chance to socialise a lot more.

“The pool table and games room in Gillies Hall are constantly in use which is great. We have people in the music room playing the piano and guitar, and the ping pong table always has someone playing.”

Lorna says that last year without these communal facilities she felt it was very much up to the individual to make friends.

“The way the building and rooms have been designed in Gillies Hall means you can’t get isolated which is great. And if you are a bit shy it’s really easy to make friends. We have also noticed a lot of residents from the student village coming here to cook in the communal areas.”

Living on campus also has many other benefits such as around the clock security.

“Not only are there amazing support systems,” says Lorna, “but I feel very safe and secure living here and that’s really important for international students. I wouldn’t not live on campus after my experience here.”

Lorna is a Resident Advisor at Gillies Hall and has been involved in the Monash Residential Services student orientation program.

“I enjoyed the city scavenger hunt but my favourite was the Frankston amazing race. It’s an activity that gives new students the opportunity to understand how to get around campus and what’s around the local area,” she says.

As a Resident Advisor, Lorna is also very involved in arranging all sorts of other activities for the residents. She ran the paramedic section of ‘Uni 101’ that was held during orientation week. Uni 101 is an activity whereby second and third year students share their course experience and offer support to first year students. She also helps out with Sunday evening ‘study suppers’ that a couple of the second and third year residents have got together to organise.

Once she has graduated Lorna hopes to work as a Paramedic and has future ambitions to work in Air Ambulance or Search and Rescue.