I recognise that in drawing the outlines of engagement between Australian and Chinese universities, one must paint with a very broad brush.

Engagement between Australia and China in higher education has a relatively short history, taking shape from the late 20th century. However, in less than forty years that engagement has expanded rapidly and diversified.

However, the way those broader goals are expressed depends on the nature of our respective economies and university systems, as well as the way national government priorities respond to these features.

Moreover, while it is clear there is strong engagement between Australian and Chinese universities, there are significant differences in scale that must be acknowledged. The number of universities in Australia is 43, while in China there are more than two thousand.[1] The Australian university student population is some 1.3 million, and for China the number is many, many times greater.[2]

When we talk of the level of commitment and engagement between the two systems we must understand that the measure of that engagement is the intensity relative to the scale of each nation’s respective system. For Australia, students from China make up the largest group of international students  on  Australian  university  campuses.  Australian  students  will never hold that position among their more numerous international counterparts in Chinese universities. 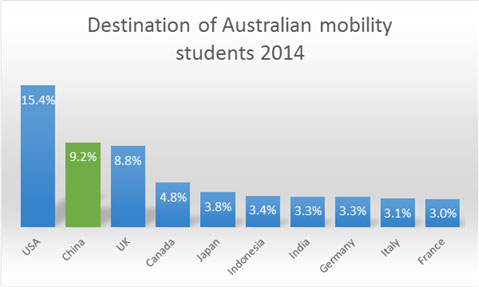 So scale should not mask intensity as the real measure of engagement between Australia and Chinese higher education.

More importantly, the nature of the engagement between Australian and Chinese higher education has matured and deepened in the last decade.

The development of engagement between Australian and Chinese higher education has gone through two broad stages in its relatively short life.

In my view, this second stage is the harbinger of a third stage which will see freer exchange of staff and students, more diversified relationships, longer chains of partnership across and between institutions and stronger links between industry and university partners in Australia and China.

Let me return to the first two stages and reflect on what has developed thus far.

In the getting to know you stage much of what happened was exploration by universities and individuals within the broad policy settings set by the two governments. Australian universities benefited from:

The result from the Australian side was much greater understanding of China, Chinese universities and Chinese students. More Chinese students came to Australia than the reverse. This is, as I have indicated above, to be expected because of significant difference in the size of population. The Australian  universities  with  their  Chinese  counterparts  built experience in how they would and could work together. Every Australian university built its links with and understanding of China. In other words, the foundations on which stronger engagement might be developed were thoroughly explored through the 1990s  and  early  2000s.

We have now entered the second stage, the maturation of this engagement or the settling in stage. Both Australian and Chinese governments have become more directly focused on this relationship, with both governments moving beyond setting the frameworks to more active engagement in the nature of higher education relationships.

On the Australian side in the last few years there has been the Australia-China Science and Research Fund, which funds Joint Research Centres (JRC), Australia-China Science Academies Symposia Series and the Young Scientist Exchange Program. My own university, Monash, is a lead partner in two such JRCs,  one  in  light  metals  with  Central South University and one on the future dairy manufacturing with Soochow University – but many such JRCs have begun in the last two years and there is wide involvement from Australian universities in them.

The New Colombo Plan funds student exchange and mobility. That Plan, along with other government schemes, funded 1,400 Australian undergraduates to study in China in 2017.[5] This was a welcome boost to an increasing trend of Australian students choosing to study in China – the number of Australians studying in China has increased over 80% in the last five years.[6] This  indicates  the  strong  interest  of  Australian students, supported by their universities and the federal government, to gain experience of China through education there.

The numbers of Chinese university students studying in Australia is large, some 110,000 in 2016, but the composition of this cohort of students has changed with a slightly higher percentage studying Masters than undergraduate degrees.[8] This is a change from previous decades. I expect the fields of education in which Chinese students are studying to become more diversified in the years to come. 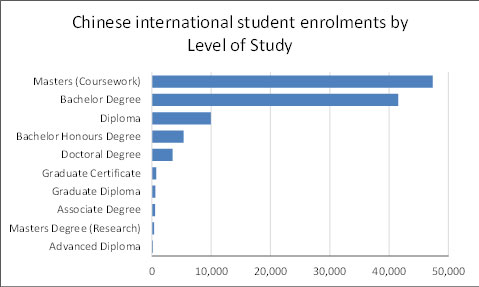 Source: Department of Education and Training

There are a number of longstanding transnational education partnerships involving articulation of qualifications between China and Australia. These partnerships have expanded to include postgraduate degrees, as well as, in some cases, joint degree offerings. So the scope of these educational partnerships  has  matured  over  time.

Education relationships forged in the past few decades have expanded or grown into new fields or types of degrees. Research partnerships have blossomed and acquired industry partners. Research collaborations spanning the two nations have increased.

None of this would have occurred without supportive government frameworks, but it has been aided in Australia by more direct funding support from government for exchange and research. For Australian universities, engagement with China and Chinese universities is strong and growing stronger, rivaling  traditional  relationships  with  US  and  UK  universities. It is clearly one of Australia’s most significant international higher education engagements and involvement will only increase.

To conclude, the engagement between Australian and Chinese universities has been a fine romance, fast to develop and spread, but now deepening. And on its current trajectory it will become in the years ahead a deeper and more comprehensive relationship.

[7] Monash is proud to have been the first international university to have been awarded a licence by the Chinese Ministry of Education to teach postgraduate students in China with South East University.

[8] Department of Education and Training, Where Do International Students Come From And What Do They Study?, Australian Government, October 2016, URL: https://internationaleducation.gov.au/research/DataVisualisations/Pages/nationalitySummary.aspx