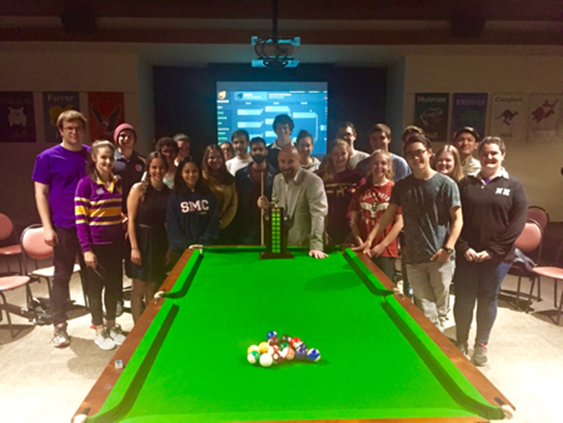 5th September 2016, teams from across the MRS community gathered to determine who would claim the title (and bragging rights) of the 2016 MRS 8-Ball Champions.  Residents from across MRS attended the launch event on 30th August 2016, where host – multiple world champion (and Monash Alumni) Robby Foldvari - displayed his amazing skills with cue in hand.  Each hall sized up their competition, then departed for a week of ‘in-hall’ tournaments to determine their representatives for the final playoff.

The individual champions met for the pre-match photo, and the event began with an explanation of the rules (which we will call ‘modified Monash 8-Ball’).  Robby also fielded some unexpected questions, such as ‘Will jump shots be allowed?'.  It soon became clear that we were in for an exceptional display of skill, well above that of the average player! 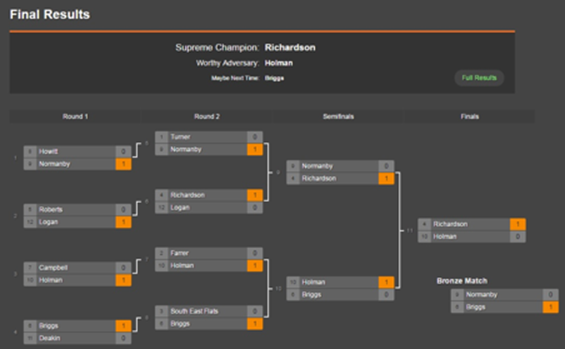 The tournament was a single round elimination, with each game limited to sixteen minutes.  Highlights from rounds one and two included a stunning come from behind win by Logan with less than 10 seconds remaining, after the early domination shown by Holman Hall.

Semifinals were a straightforward affair, with Richardson and Holman clearly in a class of their own.  This left Briggs and Normanby to battle it out for third place, with Briggs eventually taking the victory under controversial circumstances that involved a Normanby player fouling on the last shot.

The final was a best of three, with Richardson coming out strong and taking the first game comfortably.  Game two was much closer, with Holman eventually levelling the score at 1-1 after another impressive display of their trademark ‘Team Holman’ synergy.  Game three was as close as they come, despite Richardson jumping to an early lead.  Some spectacular shots from Holman brought it back to even and with one minute to go, Richardson were faced with the decision to either stall the game or attempt the outright win.  In an amazing display of skill and against all advice, Niamh chose to attempt the win and in spectacular fashion, pulled off what was the most impressive potting of the tournament to be crowned victors.

Overall the tournament was a great success and special thanks must go to Robbie for sharing his time and knowledge with the whole of MRS.  Congratulations to Jack McDonald and Niamh Alice Percy from Richardson on being worthy winners of the trophy on behalf of Richardson Hall.