Met at Monash - Rick and Mel

“There was something in the water at the Delatite Hotel,” says Mel Squire of the country Victorian pub where she met fellow Monash student Rick. They were on a geology field trip – both new to the subject in second year and knowing no one.

“It was a dark and stormy evening and there he was,” remembers Mel. “I didn’t let him let go of my hand the entire bus trip home so that’s where it all started. And we’ve been together ever since.”

But theirs wasn’t the only romance forged at the Delatite Hotel. Also to emerge from the class of 1991 were two other couples: Rob Smakman and Itta Somaia, and Rob and Caroline Venn. All three couples are still together and the six are close friends, catching up regularly along with another classmate Peter Betts, now a Monash geology professor.

“And one of the couples has a daughter who is good friends with our daughter, so friendships have now developed among the kids,” says Rick.

It’s just a shame, says Mel, that COVID-19 restrictions have meant their children haven’t had the same social opportunities at university as they did. “Our daughter is in second year and I think she’s missed out a little bit.”

Life at Monash in the early 1990s was a whirlwind of friendships, fun, band nights and beers at the Notting Hill Hotel. “It was incredibly sociable,” says Mel, who believes their bonds were strengthened by the nature of the tight-knit geology department that involved lots of ‘pracs’ and field trips.

“We all learnt together and we all made mistakes together. And it’s nice to have shared life experiences with people you started out with,” she says.

The friends remain close despite treading different paths. Three have PhDs, one couple worked as geologists in Africa, Romania and Brazil, and another couple went in a completely different direction and own a tiling business. “But when we get together the boys still talk about rocks,” says Mel. “There’s still a few dorks among us.”

A love of travel and optimism to take up opportunities as they arise has characterised Rick and Mel’s working life around Australia. Today they work at the forefront of efforts to transition Australia to a low-carbon economy.

But, as graduates, their first stop was Darwin, working in gold exploration and mining. They then traversed the country for Rick’s PhD at the University of Tasmania investigating the architecture and evolution of Cadia – the largest gold-copper system in NSW.

Roles for Rick with the University of Melbourne and then Monash brought them back to Melbourne 20 years ago. He is still connected to Monash as an affiliate contributing to papers, but he segued into mining investment and equities after an old colleague from the Northern Territory offered him an opportunity he “couldn't refuse” with Deutsche Bank.

“He said, ‘I’ve got this job where you travel the world and come home and write a short report on whether we should invest or not’,” Rick recalls. “And I said, ‘gee that sounds like my kind of job’.”

Today, as portfolio manager at Acorn Capital, he invests in mining companies exploring for resources that will facilitate the transition to a low-carbon economy. These “metals of the future” – lithium, cobalt and copper – are important elements for new energy technologies and components such as advanced wind turbines and electric cars.

For Mel, who completed an honours year in environmental science specialising in climate science, her focus, as sustainability group manager with Newcrest, is on cleaner mining processes.

“So, when we talk about climate change, it’s about looking at what renewable technologies the company should invest in,” she says. “We’re looking at fuel switching and other technologies to reduce our greenhouse gas emissions and energy use.”

Like two sides of the same coin, they are tackling sustainable mining from different angles with a common goal for a better future for humanity.

“The geologist in Rick is working out what to look for and where, while as an environmental scientist I’m saying, ‘well this is how you can actually mine it sustainably’. So our work is very complementary,” Mel says.

It makes for interesting conversations around the dinner table: “We’re often talking about what is needed to facilitate a low-carbon future,” Rick says. “It’s easy to talk about change, but you’ve got to actually enable it to happen. So that’s why we’re really excited about the future and what it holds.” 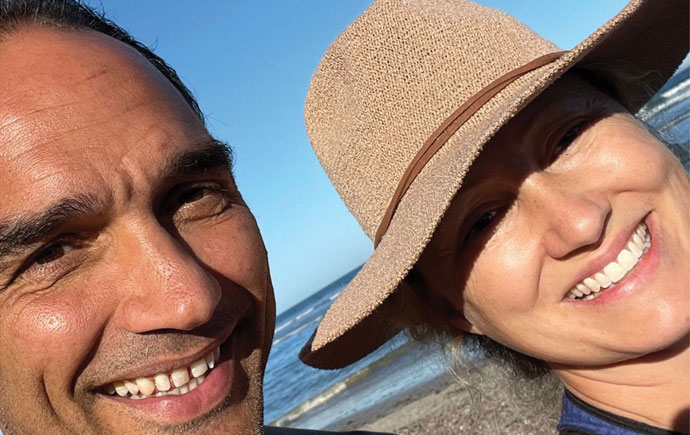 READ NEXT: From friendship, to love, to a global consultancy