Met at Monash - Jarrel and Jennifer

Dr Jarrel Seah and Dr Jennifer Tang may be rising medtech stars, but it was a piano at Monash that drew them together. Meeting in 2010 in their first week as undergraduate medical students, they were part of a friendship group who played music.

Between classes they would take breaks in the Campus Centre basement, where there were pianos in different rooms. “The walls were thin and one time I was playing and Jarrel began copying exactly what I had played,” Jennifer says. Like an echo, she remembers, “but with perfect pitch”.

Fast-forward a decade and the now-married couple both still love to play, even though there’s no room for a piano in their small home – not among all the computer hardware.

These are the tools of an impressive trade they ply alongside their medical training – developing medical technologies.

“Throughout medical school and our careers, Jarrel and I have always looked for what can be improved and whether there is a way we can contribute,” Jennifer says. “We both went into medicine to help people, and by incorporating technology into this, you can have much greater reach.”

In one of their latest ‘home projects’ Jarrel is harnessing artificial intelligence (AI) to predict the growth of brain and lung tumours. The couple sometimes has so much hardware running they joke they barely have to use their heating in winter. “If it gets a bit cold I say, ‘let’s fire up the GPU [graphics processing unit] so I can warm up’,” Jennifer laughs. The seeds of their entrepreneurial spirit can be traced back to their undergraduate days. In 2014, in fourth year, they developed Eyenaemia – an app that can screen for anaemia through a smartphone photo of the eyelid, rather than a blood test.

The invention won them the global Microsoft Imagine Cup, a $50,000 winners’ prize and a mentoring session with Bill Gates – a pretty good return from a competition Jennifer suggested they enter “just for fun, to see what happens”.

Jennifer explains that they came up with the idea for Eyenaemia during their regional rounds in country Victoria. “I was doing obstetrics in Mildura and realised women had to travel quite a fair distance to get blood tests,” she says, “so we thought it could make an impact in the community.”

With their prize money, Jarrel travelled to Kenya to teach community health workers how to use the app. They have since discontinued work on the technology (trials showed the clinical impact was not as strong as they had intended), but the experience gave them the confidence to pursue their medtech ideas as they continued their studies.

As interns at the Alfred Hospital, they built a mindfulness app called TREAT. Based on the Therapeutic Relaxation And Enhanced Awareness Training mental health program, the app provides short mindfulness and meditation sessions that help people de-stress in the workplace. Initially developed for health professionals, its scope is growing along with its worldwide audience. And it’s set for a major expansion over the next 12 months.

“It is reaching a lot of people,” Jennifer says. “We know a lot of schoolteachers are using it. And, in the time of COVID, stress levels have really gone up among the broader community.”

Jennifer says she and Jarrel work well together because they have complementary skills. “I love the user interface and how people interact with something. And Jarrel is very good at the back end and making sure everything works.”

Not that he formally studied coding. He just “picked it up” in his early undergraduate days when he and some friends decided to make puzzle-based games for iPhones that Jennifer would “test out”.

Jarrel was always interested in a range of scientific pursuits beyond medicine, from maths to physics to programming. Such was his hunger – and capacity – for broadening his knowledge he would gatecrash physics lectures while Jennifer took notes in their medicine lectures for them both.

These broader interests are reflected in the scope of his work, which crosses medicine with science and deep learning. He is a consultant at Harrison.ai, working on projects such as developing AI technology for chest X-rays to improve doctors’ consistency and accuracy in detecting lung cancer and lesions.

He is also an honorary research associate at Monash, and part of its iBRAIN research laboratory led by mentor Professor Meng Law, applying deep learning to projects including the early detection of neurological diseases such as Alzheimer’s and brain tumours.

And all the while both are committed to their medical careers – Jennifer in her fifth and final year of specialist radiology training and Jarrel is in his third.

Enhancing outcomes for their patients through deep learning technologies is an ongoing objective for the couple. “The two of us have always thought AI is more of a superpower than anything else, helping radiologists and doctors to be more efficient,” Jennifer says. “As it has in many other fields, it will enable doctors to focus on the important and difficult cases.”

The opportunities are boundless for the couple who somehow found the time to get married in 2017, in a ceremony complete with a virtual reality experience for guests who couldn’t attend in person.

Fellowships in the US are on the horizon, but before that Jennifer will take up a role at BreastScreen Victoria, looking at using deep learning to improve the interpretation of mammograms.

Jennifer says she wants to use any international experience to further improve health systems in Australia, and Melbourne where she was born and bred.

It’s lucky, she says, that her Singapore-raised husband chose her home town and university to study. “It all started at Monash,” she says. “I’m always telling people how fantastic it is – just look at what can happen.” 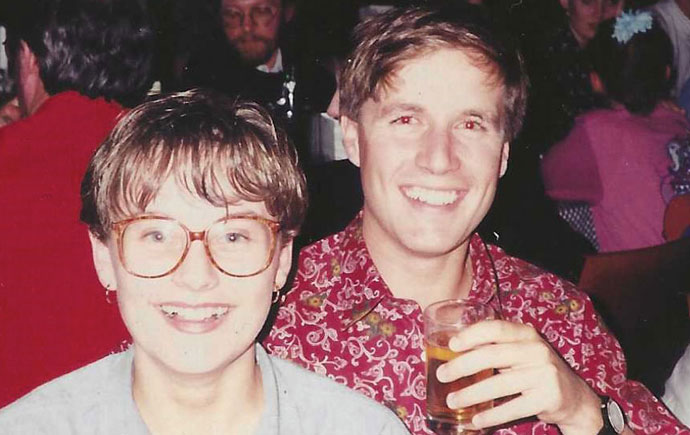 READ NEXT: Romancing the stone: Dr Rick and Mel Squire