Met at Monash - Tara and John

From friendship, to love, to a global consultancy: Tara Wilkinson and John Garnaut

When Tara Wilkinson’s friends threw her shoe into the lunchtime crowd in the Monash Union building (now Campus Centre)  she thought it was a bit of a joke. Little did the first-year law student know she would meet her future husband as a result.

Tara was beguiled by John Garnaut’s response after her shoe landed on his legal process textbook. He wasn’t angry. He didn’t even seem surprised. Just very calm, “like it was the most natural thing in the world that a shoe had hit him”, she says. “And he was in these well-worn hiking boots and looked like something out of Mad Max, without so much leather. And I thought, ‘this guy really is different’.”

If Tara had noticed John, he had noticed her as well. Some 25 years later, delivering a 2021 Monash University graduation address, John recounted how he had found it difficult to concentrate in class whenever she sat in front of him. “It was very distracting,” he said.

In his address John also confessed he wasn’t ever a very good student. Nor was he good at keeping any number of the part-time jobs he had through university. From bottle collector to security guard, he found a way to lose them all.

But he did possess an ability to grow from his failures. “Through my accidents and mistakes – I think that’s where my most important learning happened,” he said.

Today, with Tara, he runs Garnaut Global, a consultancy that counts some of the world’s largest fund managers and technology companies as clients, providing strategic advice on the Asia Pacific. It’s the latest incarnation of a glittering career that has involved successful turns as a lawyer, foreign correspondent and prime ministerial adviser and speechwriter.

“I tell people I bought while his stock was low,” says Tara of John’s ascent from self-confessed underachieving student to the corridors of power in Canberra, Beijing and Washington.

“He says himself he wasn’t the most diligent student, but he found the right work for him and learnt along the way,” she says. “And now I always tell our kids, your grades are not your worth.”

Character, John said in his address, is what really matters in the world. “You don’t need brilliance, but you do need hard work, you need integrity and, above all, you need resilience.”

Strength of character is what Tara identified in John over that first shoe encounter – an assessment that only grew with their friendship at university.

It’s what she saw in the “genuinely respectful” way he behaved around women. And it’s what she noted as he threw himself out of his comfort zone and into life drawing classes with her, despite not having an artistic background or any real technical ability.

“He seemed so comfortable with being so far behind everybody else,” she says. “And I found it so charming that he just unashamedly went and learnt and got better.”

John concedes he may have had an ulterior motive – taking the class to spend more time with her. But she says at university it was never clear they would become a couple. And besides, she liked him too much to risk a romantic relationship.

“I thought his friendship was so, so precious. I didn’t want to play roulette with that,” she says. “In a romantic relationship, things can go pear-shaped very quickly. And I didn’t want to spoil what seemed to be such a meeting of minds.”

Bonding over their love of words, the two had one of their first disagreements over whose feelings ran the deepest. “I thought it was obviously me, because John loves words and information, but I’ve never known him to read a book from cover to cover,” Tara says.

A voracious reader, Tara library-hopped her way through Monash, devouring all sorts of books from metals engineering to psychology.

She brought a different perspective to university than most. . Her mother was terminally ill (something she only shared with her closest friends, including John), and she moved back home to help care for her. The experience influenced her outlook on life, “living each day in the moment because you don’t know how long you’ve got”.

At Monash she chose subjects – criminology and anthropology – that “lit her up” rather than being tailored for a particular outcome. Her career trajectory, “more like paint splattered on a canvas than a straight line”, involves the Office of Film and Literature Classification’s legal department, strategy for Chinese artists, scriptwriting and back to law. “I have just followed my interests and taken opportunities as they come up,” she says.

The opportunity for Tara and John came more than three years after that shoe landing. When they finally got together in their early twenties, after circling each other in libraries and life drawing, she couldn’t believe it had taken them so long. She remembers thinking, “Of course! Why weren’t we together before? It’s the most obvious thing in the world.”

Today they are happily back in Melbourne with their three teenaged children and, importantly, close to family. “It’s worked out as we hoped, but we don’t bank on anything because, really, life is just a series of strange events,” Tara says. “John and I can get interested in an idea and we sort of escalate it and it can go in any direction.” 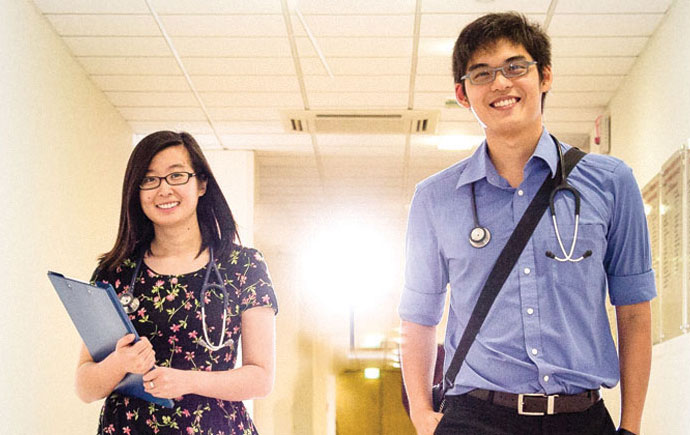 READ NEXT: A marriage of medical minds