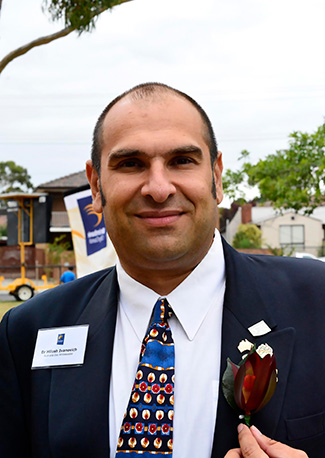 An outstanding academic background has seen Dr Milosh Ivanovich go from a nine-year old immigrant who did not speak any English, to attaining his Doctor of Philosophy in Information Technology by the age of only 22. He attended East Oakleigh Primary School for two years, and then enrolled in a program for gifted students at University High. Dr Ivanovich obtained his high school certificate at the age of 15 and became the youngest full-time student at that time to enrol at Monash University.

At 19, Dr Ivanovich obtained his degree in electrical and computer systems engineering with First Class Honours as Generation Dux and went on to complete his Masters degree in just seven months. The degree was undertaken by research, enabling Dr Ivanovich to combine his project with work tasks at the nearby Telstra Research Laboratories, where he worked at the time. In 1995, Dr Ivanovich was awarded the Ian Langlands Medal from the Institute of Engineers, Australia, for being the best graduate from all Engineering faculties within Victoria during that year.

Dr Ivanovich then took only two years to complete his Doctor of Philosophy while working at the Telstra Research Laboratories in Clayton as Senior Research Engineer. Once again, the academic nature of the Telstra research assignments allowed Dr Ivanovich to combine work and study, and achieve the degree in record time – about half the time it usually takes an Australian doctoral candidate from enrolment to graduation.

In 1999, Dr Ivanovich was awarded the Monash University Mollie Holman Medal for the best doctoral thesis, and has since emerged as one of Australia’s leading authorities on teletraffic engineering and network modelling.

Dr Ivanovich was the Victorian winner of the Young Australian of the Year 2000 Award, at both the category level (Science and Technology) and overall, as well as one of three national finalists for Young Australian of the Year in 2000. In addition to his doctorate, Dr Ivanovich has to-date published and presented over 50 academic publications, including two edited book chapters, a provisional patent, an International Telecommunications Union standards submission for the Telecommunications Standardisation Sector, and peer-reviewed articles and invited keynote addresses in top-level international technical journals and conferences.

Dr Ivanovich is currently working as Principal Domain Expert in Wireless Traffic Modelling and Optimisation at Telstra, and since 2007 he has also been an Honorary Research Fellow of Monash University, working as an external supervisor of masters and doctoral students.

Dr Ivanovich has a Bachelor of Engineering in Electrical and Computer Systems Engineering with First Class Honours, a Master of Computing and a Doctor of Philosophy in Information Technology from Monash University.