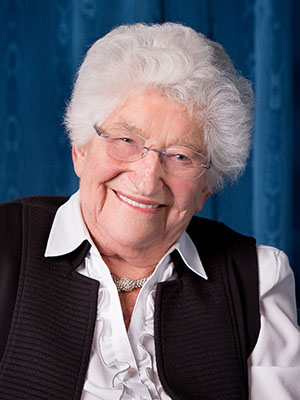 "Arts Angel" of Melbourne, Miss Betty Amsden AO was born and raised in Sandringham before attending Hampton High School and Stott's Business School. In her early professional life she commenced as a stenographer for Melbourne patent lawyers Phillips, Ormonde, Le Plastrier and Kelson later being headhunted as a Buying Officer for Renown and Pearlite (now AMCOR).

Known for her generosity and strength of character, Miss Amsden established the Princeton Private Hospital in Camberwell in 1964. Princeton, a 20-bed unit facility, was one of the first modern aged care facilities in Australia providing an intermediate home for the elderly for 10 years. The second aged-care facility that she developed was Bellden Lodge, a 60-bed unit facility on a large plot of land in Croydon. Miss Amsden's quiet humility is defined no better than by the fact that, despite huge demand for rooms at Bellden, she regularly provided care for those who could not afford to pay.

Following the long success of her residential care facilities, Miss Amsden's first major donation to Arts Centre Melbourne occurred in 1992, culminating in a significant recent $6.6 million donation over the past five years to fund a range of initiatives, including scholarships, leadership training and access programs for regional youth. She has become one of Victoria's leading individual donors to the Arts.

For her service to the community as a philanthropist, Miss Amsden was honoured with the Order of Australia Medal (OAM) in 2002, Officer of the Order of Australia (AO) in 2014, received the Melbourne Award for Community Service by an individual in 2010 and was inducted in the Victorian Honour Roll of Women in 2012.

Having joined the board of Guide Dogs Victoria in 2010, Miss Amsden's community service contribution has been felt far and wide. She is or has been a founding member of the Melbourne Chamber Orchestra, governor of the Arts Centre Foundation, trustee of More Than Opera, patron of the Victorian Opera, president of Private Giving of the Australian Ballet School, patron of Arts Bites (for children) at the Arts Centre, patron and board member of Orchestra Victoria, patron of the Polyglot Theatre, board member of the Australian Ballet School and most recently the major initiator of the "Play me, I'm yours" public piano installation around the City of Melbourne.