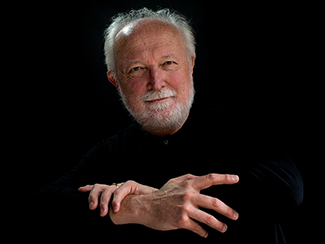 John O’Donnell – Monash University organist, founder/director of Ensemble Gombert, and director of music at All Saints’, East St Kilda – was born in Sydney and educated at the Sydney Conservatorium of Music, where he was appointed lecturer in academic studies at the age of 18.

John performs as a conductor, organist, harpsichordist and pianist, and is also active in music research and editing. He’s undertaken 21 concert tours in Europe and 12 in North America, principally as organist and choral conductor.

He’s the first person to perform Bach’s complete keyboard works (organ and harpsichord) in public, a total of 29 recitals. His recordings of the complete keyboard works of Johann Caspar Kerll (which he had previously edited for the Viennese publisher Doblinger) and organ works of Bach have met with international acclaim, later named Best Recording of the Year (2000) in the London International Record Review.

At the Woodend Winter Arts Festival, he directed multiple performances of Gagliano’s opera La Dafne (1608), Peri’s L’Euridice (1601, the oldest extant opera), and the six intermedii to the play La Pellegrina (1589). During 2009, he conducted a highly-acclaimed season of Handel’s opera Serse (Xerxes) with Victorian Opera, for which he was nominated for a Green Room Award.

He’s also directed multiple performances of Baroque and Classical choral and orchestral works, including Handel’s Coronation Anthems and Jephthah, Bach’s St John Passion, St Matthew Passion and Mass in B minor, four of Haydn’s Masses, and Mozart’s two Vespers settings and Requiem. His major areas of research have been performance practices in the music of Bach, and musica ficta in High Renaissance polyphony.

In 1973, John was invited to Monash to advise on the commissioning of an organ for Robert Blackwood Hall. He stated at the outset that his preferred builder was Jürgen Ahrend of Leer in Germany, and the following year the Ahrend Orgelbau was contracted to design and construct the instrument.

This month, John has had 46 years of continuous service to Monash, successively as organ adviser, Robert Blackwood Hall organist, and University organist.