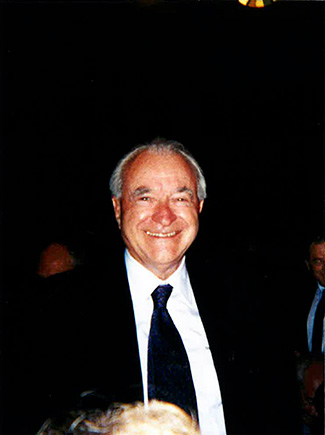 Emeritus Professor Derek Denton AC graduated in medicine from The University of Melbourne in 1947. He was first assigned as Junior Resident Medical Officer to Mr Albert Coates who with Mr Edward ‘Weary’ Dunlop had become famous for their devotion to their fellow Australian prisoners on the Burma-Thailand railway during World War II. Three months after completing his studies, whilst caring for a patient with a pancreatic fistula, Professor Denton made a new discovery on kidney function at the Royal Melbourne Hospital which was published by Nature (London, 1948). This began a career as a research physiologist, mentored by Professor Roy Douglas Wright and Sir MacFarlane Burnet.

In 1948 Professor Denton worked under Professor Frank Fenner at the Walter and Eliza Hall Institute. In 1949 he set up the Ionic Research Unit, supported as a Senior and then Principal Research Fellow of National Health and Medical Research Council, in the Department of Physiology at The University of Melbourne, working with Dr Victor Wynn. The Ionic Research Unit first originated flame photometry in clinical medical practice internationally. Between 1964 and 1970, he was Administrative Head and Chief Scientist of the Howard Florey Laboratories of Experimental Physiology in the Department of Physiology. In 1981 he became the Founding Director of the Howard Florey Institute of Experimental Physiology and Medicine, the ‘fons et origo’ in Professor Wright’s terms. Under his leadership, the “Florey” became known as one of the world’s leading medical research institutes.

Professor Denton is internationally acclaimed for his research into instinctive behaviour, including that which controls the water and balance of salts in the body, and evolution of the mechanisms involved. The American National Academy of Sciences at his election in 1995, cited him as the world’s leading authority on the regulation of salt and water metabolism and relevant endocrine control mechanisms. Apart from hundreds of articles in specialist journals, he has also published the books ‘The Hunger for Salt’ (1983) and ‘The Primordial Emotions: The Dawning of Consciousness’ (2006). His book ‘The Hunger for Salt’ was described by Dr John Pappenheimer of Harvard University at ‘the best example of integrative physiology to come out of the second half of the 20th century’ and Harold Schmeck of the New York Times said his book ‘may be the most comprehensive treatment of the subject ever completed’.

Professor Denton is one of the world's leading workers and thinkers in the field of body fluid control. He has made outstanding contributions to the physiology of body fluid homeostasis, particularly the mechanisms involved in the regulation of body sodium. His experiments have provided many new insights on sodium homeostasis, secretory processes and endocrine influences in environmental adaptation. He pioneered in the method of adrenal autotransplantation in sheep. Through this he was the first to elucidate in vivo the role of direct ionic and hormonal mechanisms (particularly the role of ACTH, potassium angiotensin II and III) on aldosterone secretion. He was the first to show that the salt appetite of wild animals often arose in response to marked sodium deficiency.

Professor Denton has continued his research as Director Emeritus of the Howard Florey Institute and remains actively involved in the study of consciousness, dealing particularly with the organisation within the brain of instincts and primordial emotions. Professor Denton was appointed as a Companion of the Order of Australia in 2005 for 'service to science through leadership in medical research in the field of physiology relating to sodium homeostasis and the body’s regulation of fluid and electrolyte balances, and to the arts'.