The contribution made by Monash alum and former Treasurer of Victoria, Rob Jolly, to advance medical research. 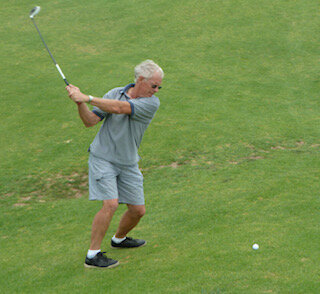 Monash alum and former Australian politician and Treasurer of Victoria, Rob Jolly can be justifiably proud of his contribution to his community since graduating from Monash with a Bachelor of Economics (Honours) and then returning to complete a Diploma of Education and a Master of Economics.

However, of his many roles (more later), Rob is particularly proud of his contribution to advancing lupus research at Monash. Rob has actively supported Lupus research at Monash University since 2007 when the Jolly family established the Kim Jolly Lupus Research Fund in memory of his daughter, who died from Lupus and associated conditions.

Rob and his partner, Kaye Thomas organise the annual Lupus Victoria charity golf day on the Mornington Peninsula. The Kim Jolly Lupus Research Fund has contributed more than $400,000 to support the Lupus research of Professor Eric Morand and his team at the Monash School of Clinical Sciences.

These funds helped establish data collection in the Monash Lupus Clinic, the first multidisciplinary clinic for lupus patients in Australia, and the establishment of the Australian Lupus Registry and Biobank, a national multicentre network. The clinic and biobank were pivotal to Monash's leadership of the Asia-Pacific Lupus Collaboration, now the largest longitudinal cohort of lupus patients ever assembled.

This initiative, in turn, contributed to an international clinical trial led by Monash scientists, which, in August 2021, resulted in the approval of one of only two new treatments for lupus approved in the last 60 years.

“It was an emotional moment for me when Professor Morand called to confirm that the US Food and Drug Administration had approved anifrolumab,” Rob said.

However, there is more work to be done and Rob and Kaye are once again organising the Links for Lupus Golf Day, which this year will be held at the Flinders Golf Club on Friday, October 14. Monash alumni are welcome to join this popular event. You can find out more about registering here.

Lupus affects about 20,000 Australians, mostly women between the ages of 15 and 45. Symptoms range from fatigue, painful swelling in the joints, and rashes, to life-threatening effects on kidneys, heart and brain. Lupus reduces life expectancy; there is a 10 percent risk of death within 10 years of diagnosis.

In addition to his political career, Rob has also more recently served as a non-executive director and Chair of the Utilities Trust Australia (UTA), an infrastructure fund for institutional investors. Rob was also a member of the United Nations Commission into modern slavery in the financial sector.

Rob has a long-term interest in the environment and sustainability. He is currently Director and Deputy Chairman of Capricorn Power. Established in Melbourne in 2016, Capricorn Power is developing the world's most efficient heat engine converting waste heat to energy and using this to help solve pressing global waste and waste heat problems. In 2019, Mission Innovation named Capricorn Power as one of the world's top clean technology innovations. The Mark 2 engine is planned to generate electricity by the end of September 2022.