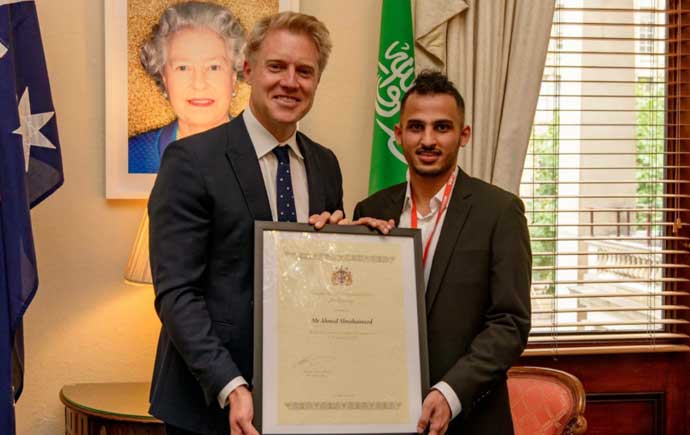 Monash University would like to congratulate, alumnus, Ahmed Almohaimeed, who saved an elderly man from drowning in Melbourne’s Yarra River.

“I was with friends and I looked in the river and saw a man who was drowning,” Ahmed says. “Immediately without thinking I jumped in the river to rescue the man. I had some difficulty at the time, he was heavy and totally unconscious, but after a number of tries I managed to save him from drowning.

“There’s a quote in the Quran – ‘and whoever saves a life, it is as though he had saved the lives of all of mankind’. This was the first thing that came to my mind. That and the fact that from the moment I came to Australia, the people welcomed me and treated me in a positive way. I wanted to help.”

Following this incredible show of bravery, Ahmed was contacted by media and government officials.

“My phone did not stop from calls and messages from the media, people and my government.  They all had good words in thanking me and checking on my health. The embassy of Saudi Arabia in Australia also sent delegates who paid me a special visit from Canberra.”

Ahmed was also one of 29 Australians who recently received an Australian Bravery Award from the Governor-General, His Excellency General the Honourable David Hurley AC DSC (Retd) this year. These awards recognise acts of bravery from Australians who when faced with a dangerous or perilous situation, who thought not of themselves, but of others.

“I was with my wife and daughter when I found out about the award. I am very glad to have this award from one of the best countries in the world,” he explains.

Ahmed completed a Master of Accounting at Monash and is now working as a teaching assistant at Qassim University in Saudi Arabia. He is hoping to get his PhD from Monash, so that he can dig deeper into his areas of interest – corporate governance, capital management and finance. He’s also working towards passing his CPA exam so that he can be a Certified Public Accountant.

What’s more, this experience has motivated him to continue to help others.

“I recently met with the elderly man and his family. They were so happy that their father was still with them.

“This experience has encouraged me to start thinking about the positives that helping others brings,” he says. “I would like to volunteer to help wherever I go. As humans, we need to care about each other and look after each other.”