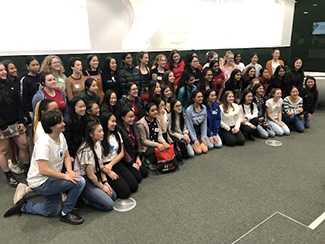 Two years ago, Monash University’s Faculty of Information Technology partnered with the Victorian Space and Science Education Centre, Micro:Bit, Tech Girls Movement, Hacker Exchange and Monash Generator (which supports Monash startups) to develop an entrepreneurial mindset in the next generation of female IT students.

Five hundred secondary school girls and 25 female IT students as mentors worked in teams on ideas based on the Internet of Things – the network of physical devices embedded with electronics that enables objects to connect and exchange data. Girls developed a project idea, created a prototype, and built a viable business concept around it.

In October, the final 13 pitches from students were judged, and two won the trip to Silicon Valley.

These amazing all-female teams have already developed ideas and prototypes:

Congratulations to all 13 finalists – we look forward to the continued success of this program.