An original idea is hard to come by. That’s why monash harnesses great talent and recognises that genius comes in all shapes and sizes. Here are a few brilliant ideas from Monash alumni Jon Liow (BID(Hons) 2011) and Adir Shiffman (MBBA 1999). 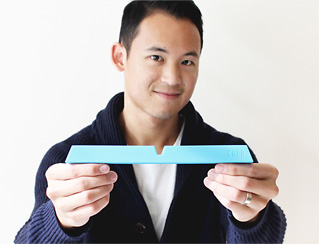 The brilliant and the beautiful

Whether Jon Liow is designing a gadget to cool a laptop or a shiny ball to produce clean water, he is driven to make the world a more beautiful place.

Describing himself as “slightly obsessed with cleanliness”, the prize-winning Melbourne designer tackles unique product design and architecture with the aim of enhancing everyday life. His journey, which began at Monash in 2007, has taken him on a ‘virtual’ fast track to New York, Dubai and Miami, and he is the lead industrial designer at Designed by m.

One of his latest creations is the Curb – a simple bar designed to elevate laptops and portable computers to enhance ergonomics, increase airflow and reduce internal and ambient heat. Produced from medical-grade silicone, it is currently for sale worldwide.

Another brilliant invention is Liow’s Solarball. Not yet in production, the Solarball is designed to supply clean drinking water at an affordable price to the 12 per cent of the world’s population who need it to survive every day. By harnessing the power of the sun, the water purification device removes lethal contaminants and produces up to three litres of clean water daily. This stunning idea won the Monash Art and Design Best Product Award in 2010 and has been featured in media worldwide. 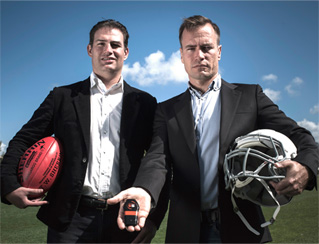 Keeping track of the stars

Measuring peak athletic performance is a complex task. But even more difficult to measure is the jump from medical degree to entrepreneur and inventor.

At the turn of the century, Adir Shiffman left medicine for a short hiatus to enter a brave new world of computer programming and small business.

His own start-up company took off and before he knew it, 10 years had passed. Back then, he specialised in websites that enabled comparisons and assessments of life insurance, health insurance and home loans. The business was sold to a publicly listed company in 2010.

These days, Shiffman’s main focus is elite sport. Catapult Sports offers wearable athlete analytics. With more than 450 clients, his team works with some of the largest sporting codes including the NFL, NBA, European football, the AFL and NRL, and other high performance, Olympic and national teams.

Products include GPS/LPS chipsets, accelerometers, gyroscopes and even a ball-tracking engine. Combined with cloud-based analytics, Catapult’s technology measures all aspects of an athlete’s performance during training and competition, including health and safety, fitness, skills execution and tactical behaviour. The systems also limit the risk of injury and can minimise overtraining and fatigue.