The powder to save thousands of mothers 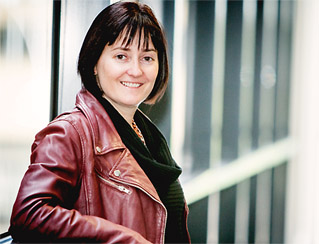 A routine discussion about an international student project led Michelle McIntosh (BPharm 1995, BPharm(Hons) 1996, PhD 2000) and her team at the Monash Institute of Pharmaceutical Sciences to make a breakthrough with potentially major humanitarian consequences.

Monash alumna and staff member Michelle McIntosh never considered that a brainstorming session with a couple of colleagues would lead to multi-million dollar funding, award ceremonies with Hillary Clinton and contact with Bill and Melinda Gates.

But most importantly, she could never have imagined that the session would generate a brilliant idea that may well soon save thousands of women’s lives.

The breakthrough occurred in 2007 when Dr McIntosh’s team at the Monash Institute of Pharmaceutical Sciences was conceiving a research project for a postgraduate student coming to study at Monash from Botswana. Chatting with her colleagues Dr Richard Prankerd and Associate Professor David Morton, they pondered the possibility of an inhalable form of oxytocin – a drug used to stop post-partum haemorrhage.

This condition of excessive blood loss after childbirth kills 100,000 mothers every year. It can be prevented or treated with an injection of the hormone oxytocin within a few minutes of giving birth.

“Richard was aware that oxytocin was not readily available in the developing world and David had a 20-year history of engineering particles for inhaled delivery,” Dr McIntosh said.

“I specialise in designing new ways of administering medicines, and then assessing how they compare to conventional dosage forms in pre-clinical settings.”

Fast forward to 2011. A new program was launched by a number of influential funding agencies called ‘Grand Challenges: Saving Lives at Birth’. Dr McIntosh’s team was selected as one of 70 finalists from over 600 applicants and were invited to attend a three day event in Washington DC to compete for $250,000 funding.

“At the meeting in Washington DC it really dawned on us the magnitude of the need for a product that replaced an injection and didn’t need refrigeration,” Dr McIntosh said.

“Even though it was the middle of the night in Melbourne, the Monash group, my friends and family stayed up to watch the live stream from Washington DC as Hillary Clinton announced that our project had been identified as the project most likely to be a transformation in maternal health care. It was completely and utterly surreal.”

The project was shining brightly on the world stage. Philanthropic organisations began to contact the group offering further funding. The Planet Wheeler Foundation, the Geneva-based McCall MacBain Foundation, the Gates Foundation and the Helen Macpherson Smith Trust have provided financial backing for the project.

“We’ve been extremely fortunate with funding and it clearly resonates with people who can see the need and benefit of the project,” she said.

Human trials are set to begin in the near future. Running in parallel with the human clinical trials will be investigations into the optimal distribution strategies in various countries.

"In some places where births happen at home, the best way to deliver the inhaler to the pregnant woman may be at an antenatal visit, as part of a safe birthing kit. When a woman gives birth at home, she could simply pick up the inhaler and breathe the medicine straight into the lungs,” Dr McIntosh said.

“We have also seen the need in hospitals when we have travelled in various countries. They may not have refrigeration and the staff are often so busy that they don’t have time to give a woman the injection.

"If they could hand over a disposable inhaler, it will improve the workflow in a busy hospital – and limit the risk of needlestick injuries. The simple fact that people in the developing world don’t currently have reliable and continuous access to electricity or a fridge doesn’t mean they should be excluded from this simple medicine that is readily available elsewhere.”

The deeply committed Monash team is driven to succeed by one compelling fact.

“We know that a child in the developing world without a mother is more likely to die before the age of five,” Dr McIntosh said.

“This product will have a profound impact on children, their mothers, the families and whole communities.”