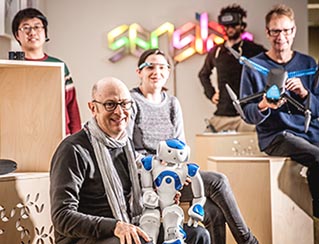 A group of researchers cluster around a humanoid robot with the mannerisms of a child. Nearby, a scientist swaps Melbourne for medieval Angkor  by donning a headset while a designer pours over a ring equipped to simulate sight.

If you wander into sensiLab, an interdisciplinary  facility that launched in May 2015 at Monash  University’s Caulfield campus, you would be  forgiven for thinking that your favourite science  fiction novel had come to life.

But for sensiLab  director Professor Jon McCormack, the  trailblazing space is less focused in fantasy  than it is in tackling challenges we face in the  real world.

“We wanted to address the changes that were happening around us and the fact that  innovation was coming from non-traditional  areas by bringing together people from different disciplines,” explains Professor McCormack,  adding that the lab hosts over 50 researchers  across  fields like IT, engineering, medicine,  art and design.

“sensiLab is oriented around visualisation, interaction design and digital fabrication.”

sensiLab, modelled on hackerspaces and innovation hubs such as the MIT media lab,  is interested in how technological acceleration  has created low barriers to entry into the  marketplace and what this means for problemsolving  on a global scale.

Professor McCormack says that working with low-cost equipment such as the Oculus Rift,  a virtual reality headset that enables wearers
to simultaneously enter immersive virtual  spaces, has sparked new possibilities for  collaboration and learning.

“Virtual reality technology used to cost hundreds of thousands of dollars but now  headsets cost around $350 so the question  is no longer about affordability but about what  happens when we connect them together.