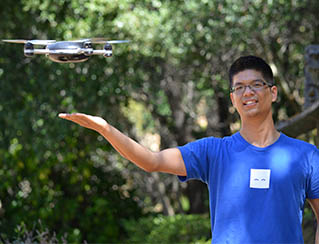 For most of us, post-work activities are a welcome distraction. But for Dr Nghia Ho (BCSE 2005, PhDEng 2009), a talented engineer with a background in computer vision and robotics, a passion for side projects helped him find his true calling.

“After completing my PhD, I worked in Australia as a software developer but started losing interest after four years,” Dr Ho said.

“I’d meet with a friend after work to work on a robotics projects for fun.

“In June 2014 I received an email from Lily Robotics. The team was impressed with a contribution I had made to another opensource project.

“They sent me a task, were happy with the results and asked me how soon I could move to the US!”

Dr Ho has spent the last year in Palo Alto, where he’s spearheading the computer vision technology that allows Lily to follow and frame its owner accurately. He also smoothed out some of the obstacles that materialised along the way.

“Antoine came up with the idea for the Lily when his mum was taking pictures during a family holiday and was never in the photo – a flying camera would ensure that no one would be left out.

“The first prototype was hacked together using off the shelf parts. We initially struggled a lot with electromagnetic radiation messing up the GPS and magnetometer.

“On the day before filming our first video, Lily had trouble flying because of loose arms. We had assumed the control software could correct for it. Since machining parts is one of my hobbies. I machined arms that were much more accurate and precise. It was like day and night.”

Dr Ho says Lily’s ability to fly autonomously is its greatest strength. And although it isn’t due for release until February 2016, it is creating ripples beyond its target market and opening the founders’ minds to its potential applications.

“We were targeting people who kayak or bike on weekends (‘weekend warriors’) but we’ve been getting requests from film companies and real estate agents.

“The software is the key differentiator because normal drones are often so hard to operate that they require and experienced RC (remote control) pilot or sometimes two operators if a camera gimbal is involved.”

“I’m also working with like-minded people to build something cool.