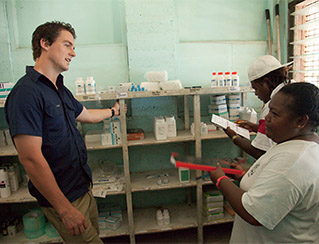 During his pharmacy degree Michael Nunan (BPharm 2006, GradCertPharmPrac 2008) faced a career crisis when he realised he no longer dreamed of being a community pharmacist.

Fast-forward 10 years and he has found his niche – in pharmacy – but on a global scale.

And while his vision might range from the Solomon Islands to Sierra Leone, he is sharply focused on his goal to provide medicine to mothers and children, regardless of location.

When Michael Nunan spoke to a group of pharmacy award recipients earlier this year, his self-deprecating humour belied the impact he has had – and is destined to provide on the health of people in developing nations.

As he told the audience, he blundered his way through his undergraduate years. Fortunately he had the opportunity to work as a pharmacist on placement in Vanuatu over the summer of his third year.

A defining moment came when Michael witnessed the death of a young boy.

“The death of a child is a profound event that affects entire communities and shapes families, regardless of culture, race or place.

“They die from pneumonia, malaria, diarrhoea, neonatal sepsis, and from vaccine preventable diseases. These are conditions that are either easily treated or prevented.”

Suddenly Michael had found his calling. After graduating and completing internships in Australia, Michael and his partner Erin (BPharm 2006), a fellow Monash pharmacy graduate, responded to a call from Australian Volunteers International to work with the Solomon Islands’ Ministry of Health.

In 2014 Michael was drawn to Africa as the Ebola crisis was escalating, working with Save the Children to set up a Sierra Leone Ebola Treatment Centre.

Now back in Australia, Mr Nunan reflects on the power of this work and the impact it has had on his training and skills.

“You cannot save lives with good intentions or ‘voluntourism’. You need highly-trained, committed people with real expertise and the financial support to put their skills into action.

“Monash is doing just that. In the labs they are undertaking research into pharmacokinetics for anti-malarials, in the lecture theatres they are training clinical pharmacists, in boardrooms they are advocating for funding.

"Our graduates are among the people on the ground, delivering drugs that are saving lives.”

He hopes that new technologies, such as tablet computers and emerging software, can improve access to medicines in clinics and hospitals throughout the Pacific.

The software his team trialled is already in use throughout the Solomon Islands, as well as Kiribati and East Timor.