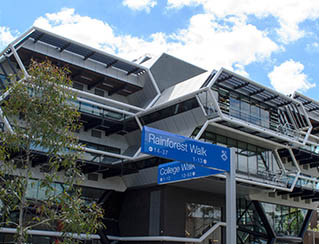 Looking towards a greener future

With great learning spaces and a design intended to stimulate innovative  thinking, the new Green Chemical Futures building at Clayton campus is  set to provide a stimulating environment where industry and academia  can connect. Te multidisciplinary hub will support researchers  and industries working in the chemicals manufacturing sector. It houses innovative teaching and  collaborative learning spaces as well as top-class research laboratories and facilities. It is also home to the Victorian Centre for Sustainable Chemical Manufacturing, the Graduate Research Interdisciplinary  Program, and  the Training and Innovation hub of the Chemicals and Plastics Innovation  Network.

A new scholarship has been created to honour the memory of law alumnus Nicholas Auden (BSc 1997, LLB(Hons) 1997) who died in 2013 from cancer. The Nicholas Auden International Study Scholarship will be offered to a law student undertaking a one-year pathways program in the UK where  Mr Auden  lived while attending Oxford after completing his study at Monash. With support from Monash and Herbert Smith Freehills, where Mr Auden started his legal career, the scholarship has $25,000 funding for its first year.  Further philanthropic support is needed to ensure the scholarship  continues.  Donations can be made online at community.monash.edu.au/givetolaw or by calling +61 3 9903 1608. One built a company to realise her passion. The other heads one of Australia’s largest pharmacy groups. Both are Monash graduates, and both have been honoured by induction into the 2015 Businesswomen’s Hall of Fame. Cathie Reid (BPharm 1991) heads the EPIC Pharmacy Group, which supplies  the hospital, oncology and aged-care sectors. The group has  spawned APHS Packaging, which delivers medication compliance  packages to more than 20,000 elderly Australians, and Icon Cancer  Care, which manages more than 75,000 patient visits yearly and is  Australia’s  largest private provider of cancer care. The keen business acumen and entrepreneurial spirit on which Ms Reid relies have also shaped the successful career of Kate Morris (BBus(Mgt)  2002), founder and director of Adore Beauty.  When Ms Morris started her company in her garage in  1999,  e-commerce was still not taken seriously. From the early days of  stocking a few products and making one sale a week, Adore Beauty now has more than two million visitors a year attracted by more than    4000 products from 120 brands. The Australian Businesswomen’s Network Hall of Fame celebrates  female business owners  with exemplary, trailblazing and inspiring  business journeys.

A decade after he initiated the Ancora Imparo program, former Vice-Chancellor Professor Richard Larkins AO was guest of honour at a reception celebrating its 10th anniversary. Professor Larkins described how the program, which fosters leadership development, was shaped by the University’s “I am still learning”  motto. The program’s spirit was ably upheld by the evening’s two speakers. Jennifer Tang, now a medical intern, talked of her team’s invention of Eyenaemia: this device, which allows people in resource-poor settings to assess their risk of anaemia, won the Microsoft Imagine Cup. And  former law student Chris Wallace, now CEO of the anti-poverty NGO Oaktree, spoke of the meaning he finds in his work, and the power of young people to help others through change. Manhattan brews a taste of Melbourne

He’s not the first Australian to see the potential in offering Americans analternative to the stuff they call coffee, but Nick Stone (BBus(Bkg&Fin)2005) may be the first Monash alumnus to give New Yorkers a taste ofreal Melbourne-style coffee culture. Mr Stone (pictured above) alreadyhas six  Bluestone Lane cafes dotted between the Financial Districtand the Upper East Side of Manhattan, and he plans to expand. Justwhere the former footballer finds the time is another question, given thathe also holds a director’s position at ANZ Banking Group’s New Yorkoffices. www.bluestonelaneny.com

Order of Australia honours for alumni

Professor Helen Silver AO (BEc(Hons) 1980, MEc 1988), former Secretary of the Victorian Department of Premier and Cabinet, was among more than 40 alumni honoured in the Australia Day and Queens Birthday honours in 2015. Together, they have made distinguished contributions to a comprehensive range of  fields from the arts to manufacturing, law to sports medicine, and business to academia. monash.edu.au/alumni/honours

Regal chat gets down to business

A group of leading academics who met HRH The Prince of Wales (HonLLD 1981) to discuss the role business schools have in the creation of a sustainable economy included alumnus Professor Stephen Brown (BEc(Hons) 1972) who now holds the David S. Loeb Chair of Finance at New York University Stern School  of Business. The discussion was part of the Prince's Accounting for Sustainability Project.