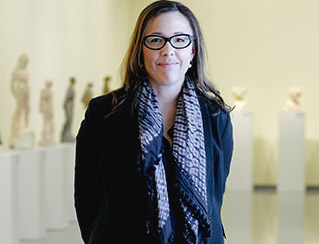 Making significant changes before turning 40 is one way to ward off a mid life crisis.

Monash University Museum of Art (MUMA), marking its 40th year this year, did just that in 2010. It became a bigger player in the Australian art scene with a move from Clayton to the more central Caulfield campus, an award-winning and larger gallery designed by Australian architect Kerstin Thompson, and a more active exhibition and education program.

MUMA has garnered a reputation as an edgy public art museum, presenting, promoting and researching post-1960s contemporary Australian and international art, and highlighting the most innovative art and curatorial practices.

In an increasingly globalised world, the gallery has developed a greater focus on art’s international context and creating international connections. This year, part of MUMA’s Spiritualism exhibition is heading to London, while the exhibition Concrete is travelling to Istanbul.

Charlotte Day (BA 1989, MA 1996) has been the director of MUMA since 2013. She says to expect the unexpected in exhibitions as “we always keep reinventing ourselves and the way we do things”.

This is true even for the exhibitions drawn from he Monash University Collection. The nationally significant collection, which began in 1961, today numbers more than 2500 artworks by more than 350 emerging and established artists, including works by Brook Andrew, Howard Arkley, Emily Floyd, Tracey Moffatt, Patricia Piccinini and Fred Williams.

The collection remains focused on post-1960s contemporary Australian art, spanning the development from modernism to postmodernism and beyond, cross a wide variety of media – from painting, drawing and sculpture to photography, video and performance art.

MUMA has similarly developed a strong public art collection, which features in the Ian Potter Sculpture Court and elsewhere on Monash’s campuses.

MUMA sprung from a modest start in March 1975 as the Monash University Gallery (MUG), occupying a small area in the Department of Visual Arts, as the brainchild of the department’s foundation professor, Patrick McCaughey (HonDLitt 1988).

Ms Gunn began the gallery’s first program of exhibitions and, as her successor Jenepher Duncan (director, 1980 – 2004) put it, she “project[ed] the new Gallery as a public exhibiting space of standing and relevance”.

When Mr McCaughey became the National Gallery of Victoria’s director in 1981, Margaret Plant replaced him as Professor of Visual Arts.

Ms Plant’s legacy was the establishment in 1987 of a purpose-built gallery on the Clayton campus.

Max Delany, replaced Mr Duncan and, oversaw MUMA’s move to Caulfield, which was green-lit in 2005 and took five years to complete. The move broadened the gallery’s public audience.

“Visits have doubled,” Ms Day said. “We’ve really been able to develop our education and public programs, and build our profile and reputation.

“The art community views MUMA in high regard. People will make an effort to see our shows.”

“I encourage Monash’s alumni to join the mailing list and be involved in any way they want, so they can feel this is their museum.

“I’m not into that old style of museum that’s a precious environment that you tiptoe through. I want a dynamic space that people feel comfortable in, share and make new experiences in, and that’s what MUMA is.”