Our man in the Pacific (and Oxford) 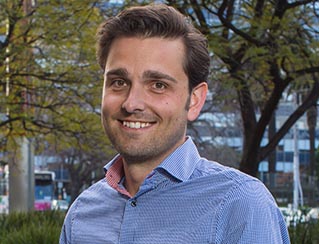 Previously a mover and shaker in Australian youth politics, he scored a job two years ago with Independent Diplomat (ID), a non-profit diplomatic advisory group based in New York that works with marginalised countries and political actors.

“It’s rare for ID to hire someone who hasn’t been a professional diplomat or international lawyer, so in that sense I was lucky to get the role.”

Mr Woodroofe’s current ID work is with the Republic of the Marshall Islands, which despite being a small Pacific nation, has become a big player on the world stage.

Last year Mr Woodroofe lived on-and-off in the Marshall Islands for six months, working out of the President’s office.

“The country has cemented itself as probably the most vocal and pragmatic vulnerable country on climate change,” explains Mr Woodroofe. “It’s a close-knit community and I loved being there.”

Mr Woodroofe believes Australia has largely overlooked its Pacific neighbours and should do more.

“Australia has some big economic and security interests in the Pacific, but it doesn’t necessarily have a sense that the Pacific matters.”

He wants to see diplomacy evolve so countries not only pursue their own interests, but also place a greater emphasis on their values through altruistic efforts.

So how did Mr Woodroofe become a diplomat at such a young age?

He went on to found Australia’s first nonpartisan think-tank for young people called Left Right Think-Tank, and another organisation called Global Voices, which provides opportunities for young Australians to be heard at international forums such as the G20.

In 2009 he was recognised as the Young Victorian of the Year. Last year he was awarded an Oxford University Rhodes Scholarship and has recently finished his first year there where he will ultimately obtain a Doctor of Philosophy.

His thesis is on island nations’ diplomatic relations and why some are more effective diplomatic players than others.

“There are great things about Oxford but what has overwhelmingly struck me is Australia also has a world leading – just different – education system and Australians don’t necessarily realise that enough. Some of my professors and tutors at Monash were phenomenal.”