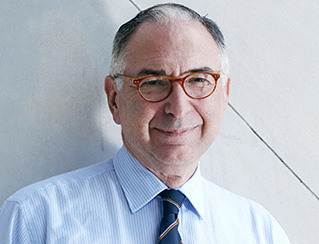 Independence is something every visually impaired person hopes for.  Noted neurosurgeon Professor Jeffrey Rosenfeld AM OBE (MD 2006) is helping turn this hope into reality.

Professor Jeffrey Rosenfeld is Director of the  Monash Institute of Medical Engineering (MIME)  and a key member of the Monash Vision Group  (MVG), the team currently developing the  world’s first ‘direct to brain’ bionic eye.

“Blind people are very attuned to using all of their senses. We aim to restore some vision to  supplement what they have already been using.  We’re hoping they’ll be a lot more functional without having to use a guide dog or a white  cane.”

The bionic eye device consists of a tiny camera mounted into a pair of glasses which acts as the  retina. A pocket processor takes the electronic information from the camera and converts it into signals enabling the brain to build up a visual  construct. These signals are transmitted  wirelessly  to scores of micro electrodes  placed in the visual cortex.

By bypassing the eyes and the visual pathways, the Monash bionic eye could benefit visually  impaired people who aren’t suitable for bionic  vision implants on the retina.

“Visually impaired people want to be able to  look in front of them and see what’s before  them, like a doorway, where the steps are,  where their cat is, or where people are situated  around them. We’re not promising facial   recognition  – we’d like to be able to promise  that – but it might take another 10 years to get  that sort of detail.”

The Monash Vision Group, led by Professor Arthur Lowery from the Department of Electrical  and Computer Systems Engineering, is now  preparing for world-first human trials.

It will be a giant step in the field of braincomputer interface. Not only could it benefit the  many people who are clinically blind, it has the  potential to assist people with other neurological  problems, such as language disorders and those with stroke.

It is this gift of healing and giving people a  better quality of life that has long motivated  Professor Rosenfeld.  He has until recently been Head of the University’s Department of Surgery and  Director of the Department of Neurosurgery  at  Melbourne’s Alfred Hospital, and in his  capacity as a military surgeon and Surgeon  General of the Australian Defence Force, has  been deployed to war-torn areas in Rwanda,  East Timor, Iraq, Bougainville and the
Solomon Islands.

What little spare time he has is given over to his  family and music – Professor Rosenfeld is an  accomplished clarinetist and performs with  Corpus Medicorum, a Melbourne-based  orchestra of health professionals.

“I strive for excellence, whether it’s in medicine or music. I’m always trying to stretch the  boundaries in neurosurgery and neuroscience;  l have a very inquisitive mind. That’s what drives  me to do innovative research.”

For now, Professor Rosenfeld looks forward to the next chapter in Monash Vision Group’s  momentous research.

“What is wonderful about this project, like a lot of the research projects conducted at Monash,  is the willingness of researchers to collaborate  across the traditional boundaries of faculties  and schools.

“MIME fosters this collaborative approach and its researchers are developing many new  exciting medical technologies along with its  partner organisations and industry as a consequence.”