The art of comics 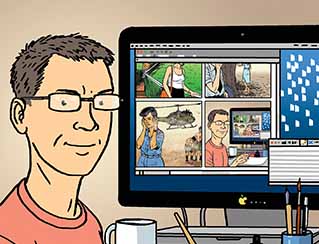 “I am an author except that I write with pictures, and making comics is very much about allowing the images to convey the bulk of the narrative,” Bruce Mutard (BA(Fine Art) 1998, MDes(Res) 2014) says. It is how the graphic novelist, writer and illustrator describes his practice.

Influenced by the legendary cartoonist Robert  Crumb, Jaime Hernandez and the ligne claire  (clear line) style of comics pioneered by Tintin  creator, Hergé, Bruce Mutard has forged his  own successful career in comics. There are  his graphic novels, including The Sacrifice and  The Silence, as well as numerous short comics  appearing in Overland, Meanjin, The Australian  Book Review and Cordite Poetry Review, among  others. The Monash University graduate lives  and breathes comics, art and culture.

“It is what I absolutely adore – galleries, dance, theatre and movies. I’m a major film buff. Film, like the movies by Ingmar Bergman, Tarkovsky,  Antonioni and Godard, has been a bigger  influence on my work than anything else.  When I’m not making, I’m consuming.  It makes me get up in the morning.”

So much so, after completing a Bachelor  of Fine Art at Monash University in 1998,  Mr Mutard returned to attain a Master of  Design in 2014, focusing on what it means  to write with pictures.

“Comic studies to date has mostly focused on content, not its formal properties, or how  comics tell stories with pictures. No one  has studied it from an academic visual arts  perspective, despite the obvious presence  of visual arts elements, so that’s where  I want to go.”

For his Masters, Mr Mutard created ‘Words Into Pictures’, an in-depth look at comics that  examined the interface between word and  image and how they operate on the page.

The research, however, was expressly created  to be exhibited. Much like an art exhibition,  people navigated comic panels hung on walls,  the very antithesis of intimately reading a comic book on your own.

“During my research it came to my attention  that comics haven’t been called out for  what they actually are. I define the comic  as juxtaposed narrative images, with the  key signifier being images placed next to one  another on a surface. That presence of them  side by side is a very significant thing. It plays a lot into how people read them.”

With his Masters now behind him, Mr Mutard is working on his latest graphic novel, The Dust  of Life, about an army nurse during the Vietnam  War.

He has also formed his own publishing company, Fabliaux, the launch title of which is the brilliant Art is a Lie collection by Carol Wood  and Susan Butcher.

“The point of Fabliaux is to primarily publish  other people’s work that hasn’t seen the light  of day or have been out of print for a long time.

As for my research, it gave me a far better appreciation of what I knew instinctively.  It’s given me a better understanding of the  techniques and tools of visual expression.”

“You need a supervisor who asks you lots of interesting and provocative questions, which  is what happened to me. You need someone  who pushes you out of your comfort zone,  going somewhere you haven’t been before –  that’s the whole point. Monash University was  great for that.”