Where dreams are made 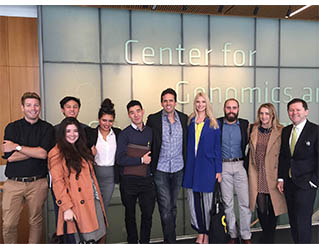 The brief: Tell us how you would change the world.

The opportunity: Eight days in New York City to meet the best and brightest minds and gain the knowledge, skills and connections to excel on a world stage.

In April 2015, eight talented Monash students spent eight days in the city that never sleeps as the successful applicants of the University’s first Global Discovery Program.

The program is an initiative of a Monash Global Leaders’ Network based on the east coast of the United States. The network, led by alumna Sue Fennessy (BA(SocSc) 1994), is one of several alumni networks planned for Australia, Hong Kong, Indonesia, mainland China, Malaysia, Singapore, the United Kingdom and the United States.

The groups will work with the University to develop opportunities to enhance the student experience and strengthen alumni networks.

“During a University trip in my 20s, I was fortunate to meet leaders from Levi, Hershey’s, Harvard, McCann Erickson and Coca-Cola.

It was an experience that helped shape my career and set the standard for what I believed was possible in my life,” Ms Fennessy said.

“As New York-based alumni, our goal was to inspire students to make a difference and give them an experience that would be life-changing.”

The Global Discovery Program included visits to the United Nations (UN), Bloomberg, Microsoft, and the New York Stock Exchange as well as functions with Monash President and
Vice-Chancellor Professor Margaret Gardner AO and prominent University alumni based in the US.

The program was a success with the students refining their career goals and pledging to work together to achieve their objectives. One student also received an internship at the UN.