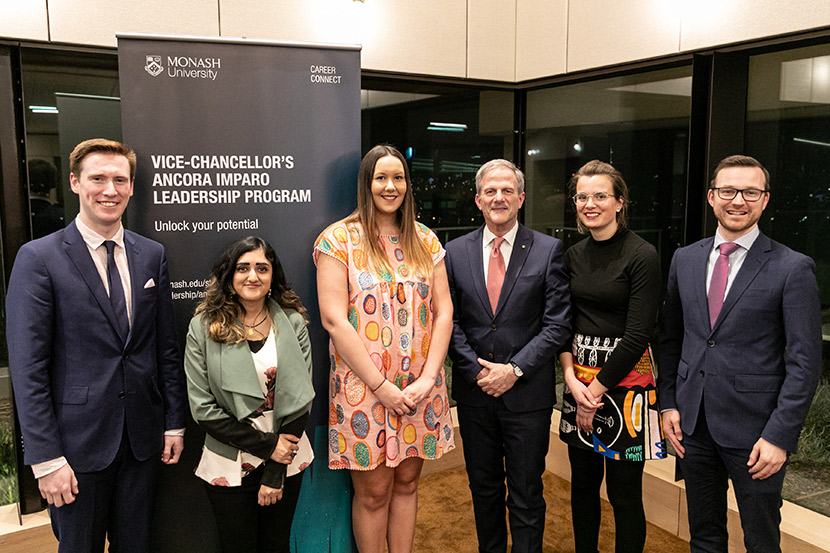 In August, 140 current and former Ancorans came together to reconnect on the future of leadership and their time in the Vice-Chancellor’s Ancora Imparo Leadership Program.

Established in 2006, Ancora Imparo is a co-curricular annual leadership program with more than 520 alumni. Each year, 40 second-year students from a diverse range of backgrounds, interests and courses are selected for the program. They are given the opportunity to enhance their leadership skills, increase self-understanding and engage with peers and leaders in reflective and issues-based dialogues.

Professor David Copolov, Pro-Vice Chancellor (Major Campuses and Student Engagement) reflected on the program’s values and welcomed everybody with a toast. Host duties were performed with compassion, humour and excellence by alum Josh Owies (2015) and current student Hannah Duffus (2017).

Attendees heard from a panel of distinguished Ancoran Alumni including Andrew Asten (2007), Ashley Paxton (2013) and Rida Khan (2014), who discussed their experiences since completing the program. They touched on what it had taught them about leadership and ‘being the change you want to see in the world’; and shared their experiences navigating their careers, families, community involvement, dreams and ambitions. They also told stories of how they have applied their leadership style, re-written the rules, and re-thought the meaning of leadership.

After the Panel Q&A, each panelist shared a “moral dilemma” with the audience, asking them to consider it from all sides. Conversations spanned from what leadership means in a multicultural and secular society; how we can decolonise leadership and management practices in society; to driving impact through organisational change.

Master of Ceremonies Hannah Duffus reflected: “I was deeply impressed by the respect in the room on Tuesday night. We deliberately chose to discuss difficult issues that we knew would split the room. Yet at all times, the Ancorans spoke and listened with sensitivity and respect. It’s truly inspiring to be part of such a conversation.”

“As we wrap up our degrees and move into the world of work, it can be easy to lose the momentum we found during the Ancora program. Among both the panelists and audience, the issues of work/life balance arose again and again. This event was an opportunity to reconnect with the values of the program in a challenging, yet supportive atmosphere. I’m feeling re-invigorated in my thinking about altruism and leadership, knowing that I’m part of this community.”

Master of Ceremonies Josh Owies echoed these sentiments: “If the conversations, questions challenges posed and complex ideas grappled with are anything to go by, I think it’s fair to say that these young people aren’t just future leaders and change makers - they clearly are already!”