In January 2019, approximately 80 Monash students travelled to Indonesia for a two week immersive experience as part of the Arts Faculty's ground-breaking Global Immersion Guarantee (GIG), a funded overseas experience available for every student undertaking a Bachelor of Arts, Bachelor of Global Studies or an associated double degree at the end of their first year of study.  Students were initially based at the Universitas Gadjah Mada in Yogyakarta and were introduced to some of the biggest environmental challenges faced by Indonesia.  In the second week, the group split into two, travelling to Jakarta or Denpasar. 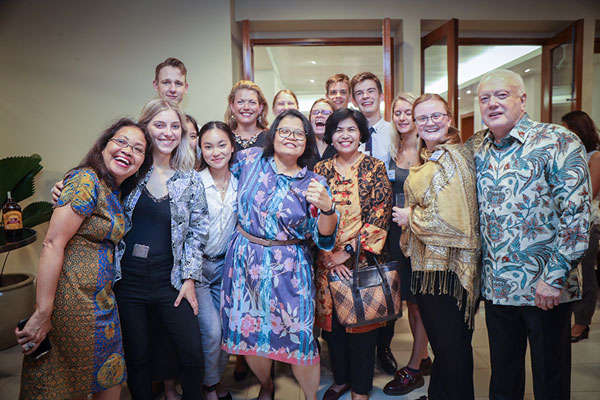 They looked at a number of real-world problems including Sustainability, Sustainable Tourism and Community Development in Indonesia. They were also introduced to issues in Indonesia surrounding renewable energy and water management and public health.

The GIG program is committed to taking students out of the classroom with fieldwork activities and had the opportunity to visit the World Mosquito Program or the Revitalising Informal Settlements and their Environments (RISE) program.

The students had the opportunity to hear from industry experts such as Mr Arifsyah M Nasution from Greenpeace; Ms Kestri Asriyanti from Sustainable District Association and Ms Dhita Rachmadini from SiDalang on their insight the world’s biggest challenges – sustaining the environment. The students were addressed by Monash alumni Ibu Dewi Wahab (MA, 1993) as well as Australian Ambassador to Indonesia, Mr Gary Quinlan AO.