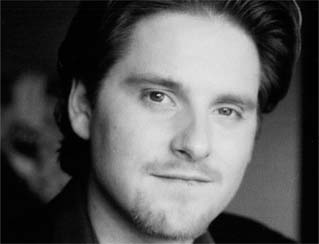 In 2010 he hobnobbed with Broadway artists and received a personal email from Academy, Tony and Grammy award-winning (not to mention his Pulitzer Prize) American composer and lyricist Stephen Sondheim, who penned the lyrics of West Side Story.

Mr   Sondheim thanked Aaron for organising the A Sondheim Triptych at the Melbourne Recital Centre.

“I think I was in shock for a couple of days,” Aaron said.

“I have been a long-time fan of his work.”

The email is one of the highlights of Aaron’s career, alongside a matinee performance of Broadway Musical, which he directed and Magnormos presented in Melbourne in May 2010.

“Two of the original cast from Broadway (one being one of the writers) and the original director had flown out to see the performance; Geoffrey Rush was sitting in the front row.

Aaron never dreamt years ago that he’d be keeping such illustrious company.

He’d always wanted to work in musicals, but initially pursued a career in theatre-writing, and fell into performing, directing and producing by default.

“I was looking to make more contacts to find out how to get my writing staged, and ended up finding an entirely new career!”

Aaron intends no pun when he says his time at Monash undertaking the Bachelor in Performing Arts has been ‘instrumental’ to his much-loved career.

“I met many fantastic people, many of whom I still work with today, and it allowed me to create my first 'network' of people.

Running Magnormos is largely possible due to the extended network of contacts that it enjoys, and Monash University is responsible for a significant portion of that.

“My career has certainly been propelled by Monash's own Professor Peter Fitzpatrick whose trust in me during my studies helped me to become the director and theatre creator that I am today.”

His greatest challenge is money: keeping the company, which has yet to receive federal funding, financially afloat whilst maintaining its largely non-commercial artistic standards. TAFE courses in small business management have helped in this regard.

Aaron hopes the future highlights of his career will be seeing Magnormos reach its tenth anniversary in 2012, and to have its work performed nationally and internationally.

And maybe another email from Stephen Sondheim this time to say, "Congratulations, I loved your show".