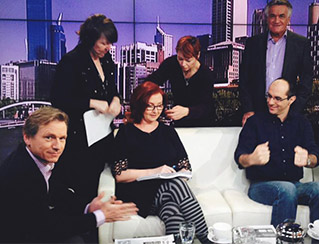 The Canberra press gallery is a tough arena. Closely observing the trials and tribulations of Australia’s federal parliament while competing for news stories alongside some of this country’s most accomplished journalists is not for the faint hearted.

“Despite that red hot competition for stories it is a lot of fun,” he says. “It’s invigorating and every day you start afresh. There are very few jobs like it.“

It wasn’t until very late into his Monash law degree that Andrew realised how much he loved the art of storytelling. Perhaps he could make a career from it?

“There was something in criminal law and a couple of other subjects that I found particularly intriguing – it was the telling of stories. Peter Heffey – my contract law lecturer – was a brilliant and hilarious storyteller. He inadvertently encouraged me to think about a journalism career.”

Not long after Andrew graduated he began a cadetship with Melbourne’s Herald Sun newspaper. His start in this unfamiliar world, one completely at odds with the legal fraternity, was an eye opener.

“It was full of crusty old journos smoking at their desks with Bakerlite keyboards that used to make a hell of a clatter when typing up stories. But as soon as I started in Flinders Street I absolutely loved it. I’m a very curious sort of person. Having a professional reason to ask questions is a wonderful thing.”

Career highlights include winning the Gold Quill in 2001 and being joint winner of this year’s Federal Parliamentary Press Gallery Journalist of the Year award. He is a three-time winner of the best columnist prize at the WA Media Awards.

“Journalism has given me opportunities to travel the world. I’ve travelled to Afghanistan a couple of times. I’ve been to the White House countless times. I got to ask Obama a question inside the oval office.

"I found myself calling out ‘What can Aussies do?’ during a press conference with Tony Abbott when Obama was talking about this new war with a then unknown group called Islamic State. Obama said something along the lines of choosing to be in the trenches with Aussies because they know how to fight. I was sternly told off by the Prime Minister’s Office for breaking protocol but hey, we got the story – and the quote.”

In today’s ever-changing media landscape, finding work as a journalist has become increasingly difficult. Andrew offers strong advice for anyone considering a career in media.

“The most important thing is to give yourself a qualification for something that you know will give you alternatives and opportunities. Learning doesn’t stop once you have your degree. Launch yourself into a life after graduation that gives you the greatest flexibility.”