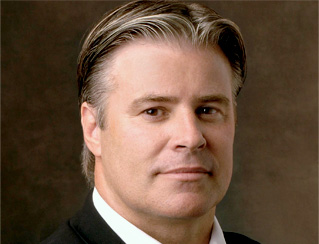 Alumnus Brett Gosper (BEc  1981) is the Chief Executive Officer of the International Rugby Board (IRB),  the Managing Director of Rugby World Cup Limited and a former advertising  executive and rugby player.

Prior to his appointment to the IRB in July 2012, Mr Gosper had  a successful international career in advertising, most recently as the president and CEO of Europe, Middle East, Africa for McCann Worldgroup, the  world’s largest advertising network. During this time he was also a member of  the McCann Worldgroup Executive Committee and Board Executive responsible for  global accounts including L’Oreal, Nestle, Unilever, Sony Ericsson and  InterContinental Hotels Group.

Sport is his other enduring passion. His professional rugby career began in  1978 when, at the age of 20, he joined the Melbourne Rugby Club. He captained  the club before moving to Brisbane in 1981 to play for Queensland. He was  recruited by French club Racing Metro in 1981 where he played until his  retirement in 1990.

During  his rugby career he received many accolades including Melbourne Rugby Club’s  Best Club Player in 1978, 1979 and 1980, and Racing Club de France’s Best Club  Player in 1987. He also represented Australia's Under 21s against New Zealand in 1980 as well as the French Barbarians  against the All Blacks in 1986.

Mr  Gosper believes the skills and experience he acquired across his advertising career,  coupled with his passion for rugby, were key to him being chosen for his latest  role. And he comes in to the IRB at an exciting time; he will oversee the return of  rugby to the Olympic Games in 2016.

“The  sport of rugby already has huge momentum around the world,” Mr Gosper said.

“The  challenge is to grow the sport commercially while preserving rugby's unique  values. I’m looking forward to helping shape its future as it grows.”

Mr  Gosper is son of Kevan Gosper, former Olympic athlete and vice-president (now  committee member) of the International Olympic Committee. His older brother  Dean (BEc 1980, LLB 1982) is the President of Ski and Snowboard Australia and a  council member of the International Ski Federation. He counts both as key  influences on his life and career.

“My  family encouraged me from an early age to follow my passions,” he said.

“It’s  advice I now try to instil in my own children and share with others: if you  find a role in an area that you have a passion for, work will not feel like  work.”