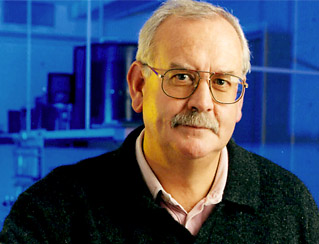 Dr Paul Fraser’s (BSc(Hons) 1969, PhD Chemistry 1972)  seven years as a Monash student set him up to become one of the world’s most renowned atmospheric chemists.

“My time at Monash University was inspirational – you couldn’t help but have a memorable time there, it was so vibrant,” Dr Fraser said.

He joined the CSIRO’s greenhouse gas research team in 1974.

Thirty-eight years later he is the leader of the CSIRO’s Changing Atmosphere research group, working to understand the composition and sources of atmospheric change, knowledge essential for informing climate change policies.

Dr Fraser’s work led to the establishment of Tasmania’s Cape Grim Atmospheric Baseline Station, the most important station of its type in the Southern Hemisphere.

In 1978 he founded the Cape Grim Air Archive, the most critical archive of background air in the world. Through this, his team has discovered several new greenhouse gases.

He has received many awards for his research, including the prestigious Eureka Prize for Environmental Research (1995), and the US EPA Ozone Protection Award (2002). In 2012 the Royal Australian Chemical Institute described Dr Fraser as ‘a living luminary of Australian chemistry’.

Despite the recent politicisation of his field, Dr Fraser remains optimistic about the future. He believes that “the creative human spirit will overcome the problems thrown up by climate change”.

An active alumnus, Dr Fraser has maintained his links with Monash initially through the Monash Cricket Club and in later years through functions and reunions. He also recently donated to the Faculty of Science Discovery and Innovation Fund to ensure future science students have the opportunity to continue great work.

He and wife Jocelyn have three children — two of whom are also Monash graduates (Engineering and Chemistry).