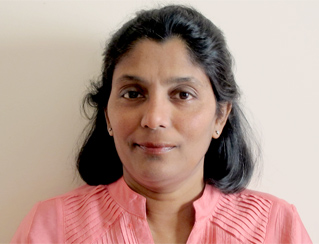 Dr Priya Mendis (MBBS 1986) doesn't remember when she decided to study medicine, although having parents who were both very dedicated and conscientious doctors may have had some influence on her career choice.

“Living in Sri Lanka when I was young I saw the  important role they played in helping their relatives, friends and their  patients with any medical problems they had,” she said. “I was inspired by  their desire and willingness to help others.”

When Dr Mendis made the decision to study medicine  she chose Monash University because she felt it had a good balance of practical experience and formal study. It turned out to be the right choice. “I had a  wonderful time at Monash. Living at Mannix College for the first three years  allowed me to meet many students from faculties outside medicine,” she said.

After qualifying she took some time to decide on a  specialty, working in paediatrics in the United Kingdom for two years and  finally settling on general practice.

She has been working in general practice  in Melbourne for the past 18 years. “As a general practitioner I have worked in  some very interesting areas including correctional facilities,” she said.

Public service has been a constant theme in Dr  Mendis’ life. In 2004 she went to Sri Lanka to help victims of the Indian Ocean  tsunami as part of the Australia Sri Lanka Medical Aid Team led by orthopaedic surgeon Dr David Young.

“I joined the group as I felt it was an opportunity  to do some aid work in a country that I was familiar with. I admire  organisations such as Doctors Without Borders that do a great service in places  that need help in emergency situations and where there is poor health care,” said Dr Mendis.

She credits her parents as the biggest influence on  her desire to be involved in community service and philanthropy. When she was  growing up her home was often the first port of call for friends and relatives with medical problems. Her parents also gave back to their schools and university.

“Since the tsunami, I have also had the pleasure of  meeting some wonderfully generous people such as Dr David Young who continues  to support Sri Lanka with his expertise as an orthopaedic surgeon as well as  being involved in projects helping to build up the infrastructure and hospitals  in Sri Lanka.

"I am always inspired by people who give of their time and energy  without expecting anything in return,” said Dr Mendis.

Dr Mendis’ philanthropy also extends to Monash  University. She has been donating funds to support students in the Faculty of  Medicine Nursing and Health Sciences for the past 10 years.

“Monash gave me a good education and I felt I needed  to give back. I think it is very important because not all students have the  financial support they need to get through University. It feels good to know that I am helping someone get an education that would support them for the rest  of their life,” said Dr Mendis.