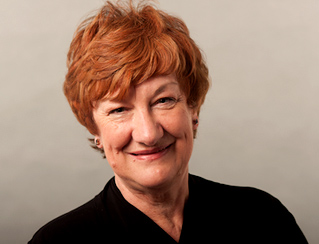 If you have children under the age of 30, chances are you'll know the book There's a Hippopotamus On Our Roof Eating Cake.

Of course Hippo wasn't recognised in the 2013 Queen's Birthday Honours but Hazel was – receiving an OAM in recognition of her more than 35-year contribution to Australian literature.

With more than 200 books for all ages, Hazel shares her enthusiasm for reading and writing with aspiring writers, educators and children through mentoring, workshops and her website's online education tools. She is also on the board of the Australian Society of Authors as a director.

Hazel's love of reading began at an early age. She devoured books, 'borrowing' from her grandfather's private lending library and quickly moving from its children's books to the adult shelves with their espionage and mystery novels.

"My father always encouraged me to learn and never censored reading," Hazel said.

"I believe that a book belongs to the reader's imagination and that story depends upon cracking the code of words and illustrations provided. The author's job is to craft that as well as possible."

Hazel left school in Year 11 after her father became ill, working in a bank to support her family while studying nights at Monash part-time over several years.

After graduation she worked as a teacher at Westall High School in Melbourne's south-east before moving onto lecturing at Toorak Teachers' College and the Institute of Early Childhood Development.

As much as she loved and loves teaching, Hazel says her heart was set on being a writer. She released her first book General Store in 1977 at the age of 27.

"From the time I could read I knew I wanted to be an author," Ms Edwards said. I didn't want to do the same job for life. Writing offered me versatility and I could continue to learn in different fields."

With so many books to choose from, Hazel says that it's her latest work f2m: The Boy Within that she regards as her most significant.

She co-wrote the young adult coming-of-age novel about transitioning gender with family friend Ryan Kennedy. A documentary on reactions to the book is in progress.

"A novel enables the reader to see from another's perspective," Hazel said.

"Like many of my books f2m explores the theme of coping successfully with being different. It has provoked a range of reactions from an international award to being thrown in the bin."

But Ms Edwards says her self-worth as a writer has never been driven by reviews, status or sales.

"I've had the opportunity to work in Antarctica. I've been a writer in residence at a former prison and in a mining community and a visiting author to schools in Indonesia and China.

"My satisfactions have come from being self-employed as a creator and the wonderful opportunities I've had to work with some imaginative minds and risk-taking problem solvers."