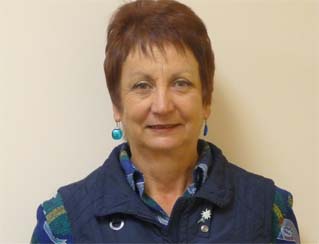 The South Australia psychologist living in remote Ceduna did her Monash degree and graduate diploma entirely by distance education whilst working full-time.

It took her eight years to complete, and a further three years to finish her supervised training before becoming a registered psychologist.

“When I decided that getting a formal qualification was the way to pursue a career path, I found that Monash was one of the few universities to offer courses by distance education,” said Jenny.

“It was, and I am sure remains, a difficult process. But it is something that I have never regretted undertaking.”

She credits her husband for his support during that period: “Without his enduring help and belief in me I may well have given up.”

Before and during her study, Jenny worked in community service without any formal qualifications.

She managed the Ceduna Commonwealth Employment Service for nine years and prior to that, worked for Families SA as a financial counsellor and welfare worker for almost three years.

It was a friend who convinced Jenny she was capable of studying at university-level.

“People have always talked to me about their problems. I decided eventually to pursue a career that enabled that to happen more formally,” said Jenny.

She has gone on to become an award-winning psychologist and has served the Ceduna community as its sole resident psychologist for the past 11 years, working at the Ceduna Koonibba Aboriginal Health Service.

Ceduna is a remote town 800km west of Adelaide, with a population of more than 3500 — about 24 per cent of which is Indigenous.

Jenny was awarded one of South Australia’s prestigious Dr Margaret Tobin Awards for Excellence in Mental Health in October 2010.

She was a joint winner of the Aboriginal Award for excellence in the provision of mental health services for those most in need or at risk.

Alongside her regular clinical duties at the Ceduna Koonibba Aboriginal Health Service, Jenny is also a Bringing Them Home (BTH) counsellor, providing support to those of the Stolen Generation.

She is the longest serving BTH counsellor in South Australia, and works closely with SA Link-Up, an Adelaide organisation that traces and reunites separated Indigenous families.

Jenny has supplemented her Monash education with a course in cognitive behavioural therapy and Indigenous-specific professional training.

In 2009, Jenny won a SA Health Allied and Scientific Health Excellence Award for her professional commitment in rural and remote clinical practice.

“As a psychologist working in a remote area and having recently been identified as an endangered species because I do this, I would like to encourage other psychologists to come out to country areas and work.

"It is different and very challenging at times but can be immensely rewarding as well.”

One of the challenges is maintaining professional boundaries in a small town. “It can be difficult to identify people who you haven’t had a professional relationship with.

Small, isolated communities expect professionals to get involved in the community. Avoiding people is very problematic both professionally and personally.”

But Jenny loves her work.

“I think the most satisfying aspect is helping people through difficult times in their lives — building up self-confidence and self-esteem.”

Those 11 years of largely work, study and training were all worth it.