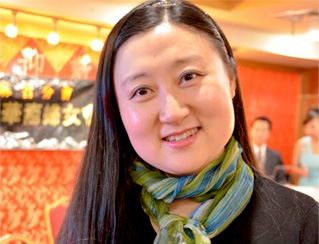 Associate Professor Jie Wang (MMus 2004) has dreamed of being a professional performer since the age of five when she performed as a member of the children's singing and dance troupe in Wuhu, Anhui Province, China.

"I knew then that I wanted to be a singer. I enjoyed the life of rehearsals and every minute on the stage," Ms Wang said.

A childhood illness thwarted her early ambitions. "When I was in high school, I became seriously ill and had to drop out of school for a long while," Ms Wang said. However, she was determined to pursue a career in music.

She undertook a Bachelor of Arts, Music Education at Suzhou Science and Technology University in China and then decided to do a Master of Music at Monash University.

"I chose Monash because it is one of the best universities in Australia and Melbourne is a very multicultural city.

"My experiences at Monash definitely helped me a lot in my later studies; I will say it made me more creative and open-minded," said Ms Wang.

Ms Wang remembers her time at Monash University with great fondness. She believes that Monash has the best international student service.

"I think all the international students at Monash appreciate the care they receive," Ms Wang said.

After completing her Masters, Ms Wang returned to China to work as a piano teacher at Suzhou Science and Technology University.

"I enjoy playing piano, but I always enjoyed singing more, and I wanted to make a living from singing in musical theatre," said Ms Wang.

A visiting professor from Texas University suggested that Ms Wang try Berklee College of Music in Boston, USA. Berklee specifically focuses on the study and practice of contemporary and popular music.

Ms Wang applied to study Music Performance at Berklee and flew to Boston for an audition. She was accepted and awarded a generous scholarship.

"I resigned from my job as a university teacher and gave up everything I had in China to study at Berklee," said Ms Wang.

Ms Wang is now an Associate Professor in the Liberal Arts Department at Berklee. She has developed a unique Chinese language, culture and music course that prepares students who are interested in exploring the huge music market in China. The course gives students basic language skills and knowledge of Chinese culture and music.

However, Ms Wang has not given up on her dream. She will be returning to her first love when she undertakes a dual Masters degree program in vocal performance and pedagogy in musical theatre at New York University (NYU) in September.

"I will be the first graduate student from the Chinese mainland to study this specific program at NYU. I am very grateful to be accepted since the audition is very competitive and I am very excited to be learning something I really enjoy.

"After many years of struggle I hope this new adventure will be the start of my career as a performer and educator in musical theatre," Ms Wang said.