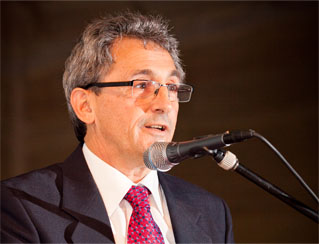 John Paxinos (MAdmin 1988) is the driving force behind the success of  hundreds of artists and small companies.

As owner of John Paxinos and Associates, he provides financial, management and consulting services to arts organisations. He  also works with artists to help them develop the business skills needed to  have a long-term career.

In April 2011 he received the Sidney Myer  Performing Arts Awards Facilitator’s Prize in recognition of his 30  years of support to the industry.

John began his career in 1980 at the Murray River Performing Group.  He worked with the company for six years  creating, among other groups, the Flying Fruit Fly Circus, which has gone on to become Australia’s only full-time circus training  institution for children.

In 1985, keen to develop his skills in the industry, he sought and received  funding from the Victorian Government to complete a Masters of Business Administration  degree at Monash.

“In 1987 I returned to the industry. I have  been offering what I like to call “assistance to the obsessed” ever since,”  John said.

“This work has great rewards because you are  constantly solving puzzles and problems and the result is that you have helped  to make an improbable creative endeavour possible.

“Early in my career the uncertainty was  terrifying, now with a lot more experience we welcome uncertainty as it keeps  things interesting.”

“In 1982, the circus was invited to perform in Vancouver, but three  months out it was cancelled,” John said.

“We were in the middle of a regional tour that was set up solely to prepare for the trip so we decided to go anyway  even taking our own tent!

“We arrived to total panic and a festival in disarray. We invited staff and volunteers to preview the  performance. At the end everyone was cheering and jumping up and down.”

John says from that moment the festival went  from chaos to joyful celebration.

“We were a smash hit, a total sell-out and the  toast of Vancouver,” he said.

“And the beauty in all this was that the  Flying Fruit Fly Circus began with a simple but powerful notion  that in any  given community there exists extraordinary skills and talents.

“All that you need is a means express it. Our  triumph in Vancouver was a powerful testament to that notion.”

So after 30 years of working in the arts what is  John’s goal for the future?

“To produce a show, festival or event that  doesn’t lose money,” he says, laughing.