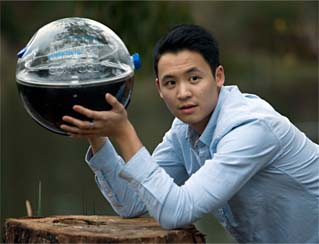 By harnessing the power of the sun, Monash alumnus Jon Liow (BID(Hons) 2011) designed a simple, sustainable and affordable water-purification device, which has the potential to help eradicate disease and save lives.

A  trip to Cambodia inspired Mr Liow to design the Solarball; its innovative  design removes lethal contaminants from village water, and could be the  difference between life and death for thousands of people each year.

The Solarball, developed as Mr  Liow’s final year project during his Bachelor of Industrial Design, can produce  up to three litres of clean water every day. The spherical unit absorbs  sunlight and causes dirty water contained inside to evaporate. As evaporation  occurs, contaminants are separated from the water, generating drinkable condensation. The condensation is collected and stored, ready for drinking.

Liow’s design was driven by a  need to help the 900 million people around the world who lack access to safe drinking water.  More than two million children die annually from preventable  causes, triggered largely by contaminated water. It is an increasing problem in developing nations due to rapid urbanisation and population growth.

“After visiting Cambodia in 2008 and seeing the immense lack of everyday  products we take for granted, I was inspired to use my design skills to help others,” Mr Liow said.

Mr Liow’s design is user-friendly and durable with a weather-resistant construction  making it well suited to people in hot, wet, tropical climates with limited  access to resources.

“The challenge was coming up with a way to make the device more efficient  than other products available without making it too complicated, expensive, or  technical,” Mr Liow said.

The product was named as a finalist in the 2011 Australian Design Awards - James Dyson  Award and was also  featured on ABC’s ‘New Inventors’.

Upon graduating Mr Liow  secured a job as a Product Designer at Kincrome, an Australian tool and  equipment company.

“Kincrome is a great place to gain  industry experience and confidence in the design field,” Mr Liow said.

“Being able to work directly with  manufacturers and customers that have a long-term relationship with a brand  gives you the opportunity to be involved with some big projects and have direct  influence over the design and manufacturing process.”

Aside from his role at Kincrome, Mr  Liow puts his skills to work as a freelance designer combining his passion for  product design and humanitarian design.

“I am also taking time to  explore my own product ideas, whether they be quirky design observations or  everyday interpretations of household items,” Mr Liow said.

“Mixing things up helps to keep my  mind fresh.”