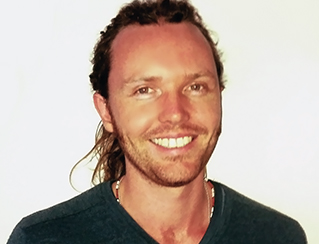 Many people say their job feels like a prison. But what if you actually work in a prison? Kaine Grigg (DPsych(Clinical) 2014) said the response he gets when he tells people about his career is regularly one of intrigue.

Kaine is a prison counsellor at Casuarina Prison - the main maximum security prison for Western Australia.

His role is to assess prisoners for self-harm or suicide risk and provide crisis counselling, brief intervention, and general guidance to assist adjustment and improve coping strategies. He also presents suicide prevention workshops to peer support prisoners and custodial staff.

“People become much more interested in my role when they find out that I work in a prison,” he said. “The ‘criminal mind’ and criminal behaviour are fascinating to most people because they appear so different to what the average person experiences in their day-to-day lives.”

It is this that prompted Kaine to undertake a Bachelor of Social Science followed by Honours in Applied Science at RMIT University. His work with young people recovering from addiction after he graduated confirmed his desire to work with people from disadvantaged backgrounds.

In 2011 he began his DPsych(Clin) at Monash, specialising in forensic and clinical psychology. As part of his research he developed and tested a measure to assess anti-racism and pro-diversity initiatives called the Australian Racism, Acceptance, and Cultural-Ethnocentrism Scale (RACES).

It has been used to assess government and community programs including the Victorian initiative, Building Harmony in the Growth Corridor.

“While my research has helped me to maintain an objective perspective around disadvantage, there is no doubt more work needs to be done. Systemic racism does exist, particularly in our legal and prison systems,” he said.

“The majority of people who become incarcerated have endured difficult times or have been otherwise disadvantaged by their position in society.

“This highlights the importance of tools like RACES. It drives me to work harder to provide robust evidence-based services to disadvantaged groups and individuals.”

His goal is to move into a specialised forensic role within government before moving into private practice. He also aims to reduce racism in Australia by increasing the use of the RACES assessment tool.

“My work is very rewarding as I am able to provide an important service to people who are in need and who are often unaccustomed to receiving necessary support,” he said.

“There is no prouder moment professionally than seeing positive behavioural change or improved engagement with challenging clients you’re working with.

“No matter what I do in the future, I am simply hopeful that my contribution can make a meaningful difference to peoples’ lives.”

If you are interested in more information about RACES or wish to collaborate with Kaine on further research email kaine.grigg@gmail.com