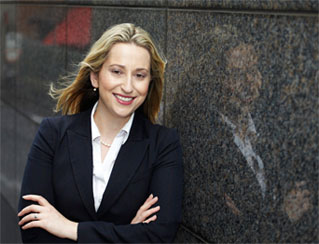 At 12, Monash arts/law graduate Kate Ashmor (BA(Politics) 2005, LLB 2005) decided the best way to channel and make money from her argumentative tendencies was to become a lawyer.

At 31, she is president of Australian Women Lawyers (AWL) and a commercial lawyer for the Victorian Government.

After graduating from Monash in 2005, Kate started her career in a boutique private practice firm before moving in-house to a finance company.

In August 2012 Ms Ashmor was announced as president of AWL - an organisation concerned with the practice and advancement of women in the legal profession.

Prior to this, she was the convenor of Victorian Women Lawyers (VWL), the peak organisation for  female lawyers in Victoria. She has also been a VWL board member for five years.

"It is an ongoing challenge to serve and support female lawyers, especially those regionally based, but through my work with the VWL and now with the AWL, I feel we can provide a forum for all female lawyers to network and feel represented."

Ms Ashmor said the highlight of her career so far was presiding over her husband’s citizenship ceremony when she was a councillor for the City of Glen Eira (2005-2008), closely followed by instructing in a Supreme Court trial and creating VWL's Law Student Mentoring Program. But she said her proudest achievement to date was the birth of her daughter in December 2011.

She said her goal going forward was to advocate for equality of opportunity for women lawyers across Australia..

“Being a Monash graduate has certainly opened up doors for me especially in employment and networking with other professionals,” Kate said.

“I am so fortunate to have had opportunities to make a difference and I intend to make the most of them."