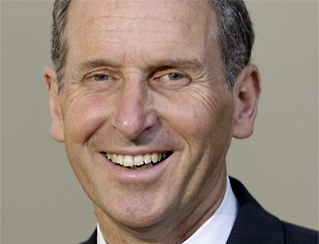 Since graduating from Monash University, Mr Rick Tudor (BSc(Hons) 1972) has gone on to become one of the most esteemed educators within Melbourne's independent school system.

"I sit here 40 years after graduating, having had a career in teaching but still with a vibrant interest in science," said Mr Tudor.

Mr Tudor credits his science training with giving him the skills that have helped him succeed in his career. "The things science taught me were critical thinking, clear communication and how to elucidate patterns. As a headmaster, I am always looking at patterns – in curriculum, student responses – and acting upon them," he said.

His interest in science began in high school. "Botany trigged my imagination. I loved making hand sections of leaves, looking at chloroplasts and cell structures. This fascination stayed with me as I did my maths, chemistry and physics," he said.

"It was in Year 11 that I decided I would become a teacher. When my father suggested that I study botany at Monash I launched into a degree in science with the idea that I would then follow through with teaching."

Mr Tudor found that the late 60s and early 70s were a great time to be at Monash University. The University was new and vibrant. The lecturers were engaging with industry and involving undergraduate students in high level research projects.

"It was a fabulous experience. There were so few students in those early days that class sizes were small, in some cases we would have only 14 students in a lecture," said Mr Tudor.

After taking a year off to study a Master of Administration, Mr Tudor embarked on an honours year in botany under the supervision of Dr David Churchill, a senior lecturer in botany whose research focus was pollen analysis.

"My project was to determine the relationship between diatom communities and water quality." Diatoms are a one of the most common types of phytoplankton. They exist wherever there is light and water. Their glass coats can survive for hundreds to millions of years and can be used to monitor changes in freshwater or marine environments over time.

Mr Tudor undertook his Masters project at The University of Melbourne where he studied the diatom profiles in the sediments of two western district crater lakes. "I took core samples from Lakes Keilambete and Gnotuk. Both lakes show present day water salinity levels of more than twice that of seawater. Data collected showed that 9000 years ago the lakes had been hyper saline, 4000 years ago they became fresh.

During the most recent 4000 year period the lakes returned to their previous hypersaline states. As these lakes are closed systems it was hypothesised that the change of salinity levels was due to changing rainfall patterns (assuming evaporation is approximately constant).

"I did not realise it at the time but I was elucidating climate change," said Mr Tudor.

After completing his Master's Mr Tudor chose not to undertake a PhD because he was determined to follow through on his plan to become a teacher. "Teaching attracted me because I enjoy people and I enjoy explaining things to people. In the end, passing on knowledge was a stronger drive within me than doing research," he said.

His first job after he completed his DipEd was in Balmoral, a township between Hamilton and Horsham. From there he went to Melbourne Grammar School, then spent some time teaching at Kings School, Bruton in the UK before coming back to Melbourne.

"There have been many highlights in my career. One of these was my time as Headmaster of Beaconhills College in Pakenham in 1989. At the time it was a new school in the outer suburbs of Melbourne with few traditions. During these early years of the life of the school, the children developed pride in themselves, their school, and aspired with ever increasing focus to achievement in study. Many students from that era have gone on to have successful careers in a range of professions."

"Another highlight was writing a book with my wife." In 1981, Mr Tudor and his wife wrote a book on human physiology and social biology. At the time there were few school text books that provided a clear understanding of the way the human body is affected physiologically and anatomically by substances such as tobacco and other drugs.

The book became a prescribed text for Year 12 Group 2 students and was used until 1989 when the curriculum changed. Dr Elizabeth Tudor (PhD Med 1984) is currently an associate professor in the Faculty of Veterinary Science at The University of Melbourne.

The consistent thread throughout Mr Tudor's working life has been a love of science and communicating science to young people.

On the issue of encouraging students to pursue science in later secondary school and beyond he said, "It is important to inspire an interest in science at an early stage and keep it practical. Science teaching needs to include a lot of practical experience. We need to move away from a focus on the laboratory and show kids that science is all around them."

"I tell students that they should go as far as they can – do a PhD, but at the same time to keep their mind open to all the other possibilities that can come from studying science."

"Today with a science degree you can go into so many fields such as mining, teaching, management, sustainability. Life can go in all sorts of directions and lead to all sorts of wonderful things."

Mr Tudor is a perfect example of how to turn an interest in science into a fascinating and fulfilling career. He is looking forward continuing to explore his passion for science after he retires from Trinity Grammar School at the end of this year.