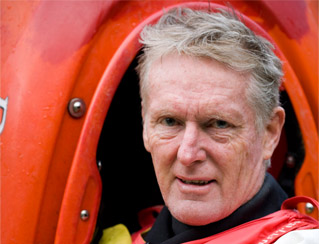 Monash alumnus Rod Harris  (BE 1969) is a successful engineer, adventurer, and athlete.

He was among the first group  of students through the gates at Clayton campus and took to campus life with  gusto.

He was very active in the  Monash Bushwalking Club, forming many life-long friendships during the group’s  bushwalking, rogaining, rock climbing and canoeing excursions. He even met his  future wife through the group.

“My academic results  improved from struggling in first year to mediocre in fourth year,” he said.

“However, the statute of  limitations does allow me to confess, for the first time, that I was  responsible for the giant yellow parking sticker placed on the East wall of the  Menzies building in 1966!”

After graduation he worked  as a design engineer with GangNail, a company that pioneered the prefabrication  of roof trusses and wall framing.

“The company’s approach to  prefabrication led to large savings in material time and labour but plant  managers found it difficult to measure output,” he said.

“I developed a unit of  production that is used world-wide to this day for costing and scheduling and  to measure output and productivity.”

Rod was promoted to a  succession of management roles within GangNail. His work took him to Kuala  Lumpur, Belgium, the UK, Seattle and Miami.

His desire to return to  Australia saw him take over as CEO of the company’s Australian operations.

“I wanted to try something  new. I had experience but no formal business qualification so completed a  Certificate of Business Studies at Oxford,” he said.

“I became CEO of a subsidiary of National Consolidated. I then managed a steel mill and quarries in Sarawak, and worked  as CEO of Kathmandu, the outdoor  equipment retailer, preparing the company for public sale.”

Rod’s passion for adventure  and outdoor sports has been a driving force in his life and he admits to mixing  his career and travel whenever possible.

In 1971 Rod, along with his  friends Ian (BE 1970) and Peter Richards, paddled south across Bass Strait – it  was the first successful attempt to do so under human propulsion alone.

He went on to become an  accomplished mountain runner, orienteer, rock climber, mountaineer, sailor and  triathlete.

He retired he says “for the  final time” in 2002 and continues to explore his love of gliding and  paragliding as well as bushwalking in the Australian outback.

“The thing  I have learnt in both, business and sport is that the difficulties that you  anticipate and prepare for don't eventuate; it is the unconsidered that does  the damage."