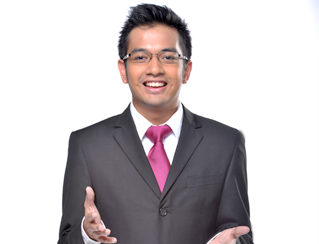 Television journalism is one of the last professions you would expect to encounter someone who is a self-confessed "shy guy". But that is exactly where alumnus Syafique Shuib (BA 2007) finds himself.

As the senior digital reporter for Malaysian television station Astro Awani, the Canadian-born Bachelor of Arts graduate says no two days are the same.

One day he could be on location interviewing guests, the next he might be preparing copy for Astro Awani's website or working with editors and producers to integrate content across the station's digital media platforms.

"It's the perfect job for me since I love new and digital media and social media. They are powerful platforms," Syafique said.

"I'm always on social media personally so to be using social media and new media as part of my work... that's just awesome."

Syafique's role at Astro Awani follows a string of previous roles in the media space including working as a producer and presenter for Bernama TV's 'The Breakfast Club'.

He also founded motivationMY.com – a blog he created to "spread motivation, wisdom and inspiration to the younger generation" - and is a sought-after public speaker.

Syafique travelled widely in his younger years, his mother's work at the Ministry of Foreign Affairs taking his family to Morocco, Indonesia and China.

"I graduated from an American high school based in China in 2003 and took a year off to really figure out what I wanted to do," Syafique said.

"No one expected me to choose journalism as my career path!

"My time at Monash University Sunway really matured me as a person and helped me to develop my personality.

"It was from there that I had the idea to start motivationMY.

"My journey is far from over and I still have a lot to accomplish but by sharing my stories and experiences I hope to provide a space where young people feel comfortable to talk about things like their career, peer pressure, self-esteem, and entrepreneurship.

"I want to empower young people to make a difference."