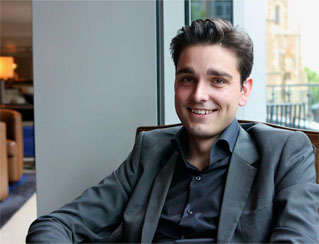 Turning down a Defence Academy scholarship and the opportunity to become a pilot, Thom chose to enrol in a Bachelor of Arts (Global) at Monash in 2008.  He wanted to engage in what he felt most passionate about – foreign affairs and harnessing the talents and ideals of young Australians.

“The main thing I’ve found it not to be bound by barriers,” Thom said.  “Don’t say ‘That’s too difficult, people will think I’m crazy’ or ‘no-one will support a young person doing that’.”

Thom felt that young people were not well served by pigeonholing ideas as left, right or centre. He founded Australia’s first non-partisan think-tank for young people called Left Right Think-Tank in 2009, and another organisation called Global Voices which provides opportunities for young Australians to be heard at international forums such as the G20.

In 2009 he was recognised as the Young Victorian of the Year for his efforts.

Thom graduated in 2012 as a Master of International Relations having written a previous honours thesis on Australia’s campaign for a seat on the UN Security Council.

In 2014 he was awarded a Rhodes At Large Scholarship to study at Oxford University.

Thom currently he works for a diplomatic advisory firm that assists marginalised groups with their foreign policy and is an Associate Fellow with the Asia Society.

“Each day is different.  One day I might be in a class or studying, the next I might be a television gig, working on a newspaper opinion piece or travelling overseas to attend a conference.  It is a rollercoaster, but I love it,” he said.

“My focus is on helping elevate the voices of those overlooked in the traditional diplomatic process – whether it is young people domestically or internationally. Ultimately, I would like to build on this on the world stage by helping countries or groups with little diplomatic capacity to have their voices heard in international forums.”

In the long term, Thom aspires to help forge a healthier balance between values and interests in Australia’s foreign policy, and look at ways diplomacy itself can be reformed.

Thom Woodroofe has come a long way from his upbringing on an isolated property in country Victoria.