Professor Ariel Heryanto presents at the Australian Embassy in Jakarta

Director of Monash Herb Feith Indonesian Engagement Centre and Professor for the Study of Indonesia, Ariel Heryanto, was invited by the Australian Embassy in Jakarta to give a talk for their Big Ideas Seminar Series in January.

The event was opened by Dr Dave Peebles (Head of Political and Strategic Communication Branch of the Embassy) and chaired by Mr Boyd Whalan (Second Secretary/Political) of the Embassy.

Professor Heryanto's talk talk re-examined some of the early signs of Islamisation in Indonesia’s public, which can be taken for granted today but had been unimaginable until three decades ago.

His examination prompts questions of interest from today’s perspective regarding the contexts in which Islamisation rapidly rose to prominence in Indonesia, and how it found expressions in popular cultures and public discourses.

The event was well attended by a passionately engaged audience.

The seminar builds on our strong engagement with Indonesia and legacy of the Centre of Southeast Asian Studies. 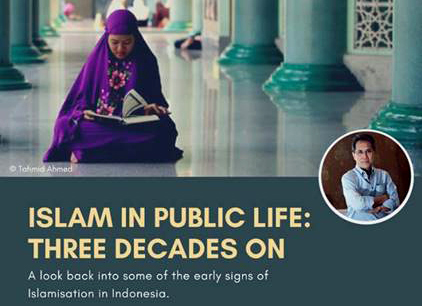 Given Indonesia’s well-noted status as the world’s largest Muslim nation, it would be easy to take the level of public display of Islamic piety today for granted, and to overlook the fact that such public display had been unimaginable until three decades ago. This talk will re-examine some of the early signs of Islamisation in Indonesia’s public life, which constitute a watershed in Indonesian history. Such examination prompts several questions of interest from today’s perspective. What were some of its major features and contexts when Islamisation rapidly rose to prominence in the late New Order period? How it found expressions in popular cultures and public discourses? What significant changes, if any, have taken place to Islamisation since then, and why? Do these changes suggest any clues of what social trends we may anticipate to follow in the near future?

Ariel Heryanto is the Herb Feith Professor for the Study of Indonesia, and Director of Monash Herb Feith Indonesian Engagement Centre.

Ariel’s long-standing contribution to the international scholarly community has been distributed in three broad and related areas: (i) the everyday politics of identity; (ii) trans-regional collaborations for building a post-Cold War Asian studies; and (iii) a search for innovative dialogues between area studies and the “new humanities”, particularly cultural studies, media studies, and postcolonial studies. While Indonesia is the country he knows best, he is keen on comparative studies across Asia and beyond.