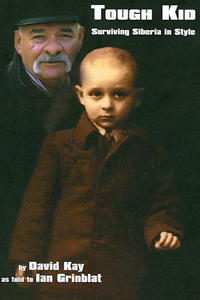 Tough Kid is the life story of David Kay, a streetwise rebel who survived Siberia and managed to build a new life in Australia. The initial 40 pages give a brief family background in Slonim and tell of David’s time in Achinsk, Siberia. Pages 41-73 portray his rebelliousness upon returning to Europe, while the second half of the book, pages 74-150, describe David’s journey to Australia and the establishment there of his new life and family. David told his story to Ian Grinblat late in life, and it was eventually published by Makor Library in 2005.

David Kay (Kacowicz) was born in the Polish town of Slonim in 1933. His family was religiously observant and ran a successful chain of butcher shops. When David was five years old, the Soviets, who occupied Slonim at the time, declared his family to be class enemies of the revolution. His father was arrested and never saw his family again. David, his mother and his brother were put on a train and sent to Siberia. On arrival they were assigned a house in a collective farm in the town of Achinsk. David’s mother and older brother were put to work while David attended a school. Conditions were freezing and food was in short supply. Corruption and theft were rife and David’s mother curried favour with important people in the town through bribes and black market dealings. Despite being a young child, David would steal from farms and market places to make extra money. He was injured and arrested numerous times, and was even involved with an organised crime syndicate. David notes that human life in Siberia was cheap, and murder and disappearances were not uncommon and usually went uninvestigated.

After the war David, his mother and his brother were repatriated to Szczecin in Poland. The Russians had killed all the Germans living in the town so that when David arrived it was strewn with rubble and dead bodies. During his four month stay in Szczecin, David used to roam the streets at night exploring, despite the danger and lawlessness of the town. The family then moved to Landsberg, where David remained a rebellious and disobedient child. In 1947 his mother sent him to a prestigious boarding school, but David soon left and went to live with two prostitutes in Munich. After Enjoying another period of hedonism in Paris, David and his family immigrated to Australia in 1949. David continued his adventurous lifestyle in Australia before marrying in 1959.

Told with frankness and honesty, Tough Kid contains fascinating anecdotes from David Kay’s childhood. David does not shy away from unflattering aspects of his past. Nonetheless, the quick wits and strength of character that enabled him to survive pervade the book.