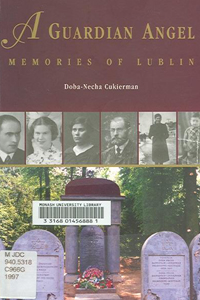 Cukierman presents an autobiography from birth, covering the years until the Russian liberation in 1944 and the end of the war in 1945. The first 90 pages focus upon Cukierman’s life growing up in the pre-war city of Lublin in eastern Poland; some 90 pages deal with her experiences living in German occupied Poland, particularly in Lublin and Krzconow, and some 40 pages discuss Cukierman’s return to liberated Lublin and life there until 1945. Cukierman’s memoir was written late in life in Melbourne and edited and published by her daughter in 1997.

Cukierman’s narrative initially focuses upon life in pre-war Poland. Born in 1910 in the suburb of Kalinowszczyzna, in Lublin, Cukierman presents a detailed account of her family history. She discusses the homes she lived in as a child, her childhood memories and her family’s experiences during World War One, including the financial devastation caused by the war and her father’s consideration of emigrating to Palestine. In 1918, Cukierman began attending a Jewish high school, completing her education in 1926. Her higher education did not occur without discrimination. She could not attend Lublin University to study law as Jews were not accepted, thus Cukierman began to study typing, eventually working as a legal secretary. With the death of her employer, Cukierman found it difficult to find work due to the rising discrimination against Polish Jews. In 1938, Cukierman married her husband, Szyja, who was to be her only immediate family member to survive the Holocaust.

Throughout 1941, the persecution and destruction of Jewish life at the hands of the Germans in Lublin increased. In March, awaiting German transportation to an unknown destination, Cukierman decided she had to save her infant daughter, arranging for her to be put into the care of some family friends until they could take her with them safely. Tragically, her daughter was murdered following the liquidation of the Majdan Tatarski ghetto. Cukierman reconstructs the murder of her parents in April 1942, using accounts of witnesses and survivors. By 1942, selections and transfers of Jews were daily occurrences in the Majdan Tatarski Ghetto and in April, Cukierman’s parents, a sister and brother were selected, along with 24 other Jews, and transported to Glusk, where they were subsequently shot. With the liquidation of the Majdan Tatarski Ghetto, the Nazi regime publicly proclaimed the death penalty for any Jews discovered outside the Ghettos and camps. In late 1942, armed with Christian papers acquired by her husband, Cukierman travelled to Firley, where she lived until 1943. On reuniting with her husband, they became members of a partisan group using their Christian identities. After suspicion of being Jewish, they left and hid at a farm in Krzczonow for the remaining 16 months until Russian liberation.

Cukierman has written in a personal, highly descriptive style, detailing her experiences both before and after the war. She vividly recounts her confrontations with German occupiers; being slapped in the face for accidentally standing on an officer’s foot, to being stopped and asked for papers by German patrols. Ultimately, Cukierman’s memoir is a personal history of her family’s experience prior and during the Holocaust, presenting the reader with a human document of tragedy and survival, in the hope that we will ‘always remember’.