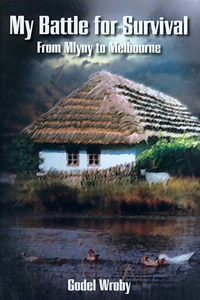 My Battle for Survival is the life story of Godel Wroby. The first 32 pages outline Golel’s family life in and around his home town of Mlyny. Pages 32-60 tell of his experiences in the Lodz ghetto as well as Skarzysko-Kamienna, Buchenwald, Schlieben and Thersienstadt. Pages 61-88 depict the rebuilding of his life in Europe after liberation, while the remainder of the book, pages 89-158, describe Godel’s new life in Australia. The book was written late in life and published by Makor Library in 2004.

Godel Wroby (Wroblewski) was born in the small Polish town of Mlyny in 1925. Godel’s family was the only Jewish family in the small impoverished farming community, so Godel prayed and was schooled in the nearby town of Rudniki. Living near the border, Godel witnessed streams of German Jewish refugees entering Poland. When the war began on September 1st 1939, Godel’s father shaved off his beard and told his family not to worry about kashrut (the Jewish dietary laws) anymore, but to eat whatever food they could find. Around a year into the Nazi occupation, Godel was conscripted to work draining marshes for the Germans. Eventually all the Jews in the area were rounded up. Godel was taken to work in the Lodz ghetto and never saw his family again.

In the ghetto, Godel was allocated to work clearing sewerage. He refused to do this job, even if it meant losing his ration, and was soon transferred to construction work. Over time more and more people disappeared from the ghetto and the population decreased substantially. One day Godel went to visit the prison where people were taken before transportation, to find out what was happening. There he traded places with a man slated for transportation, in exchange for bread, a coat and some money. Before leaving, Godel collected a sack of linen handkerchiefs from a Red Cross warehouse to use as a pillow on his journeys. He and his fellow inmates were then taken by train to the labour camp of Skarzysko-Kamienna, where they worked in a German munitions factory. Godel soon realised that his handkerchiefs were a valuable commodity and he traded them with Polish civilian workers for extra food. Others who were not as fortunate died of hunger.

Sometime in 1944 the prisoners were relocated to Buchenwald. Upon entry to Buchenwald the new prisoners were informed by some Communist inmates that a kind of democratic vigilantism operated in the camp. Upon hearing this, Godel and his fellow prisoners decided to beat to death ten Jewish men whom the crowd deemed to have abused their positions of power and betrayed their people. In comparison to the ghetto and Skarzysko, Godel considered Buchenwald a kind of paradise, with its clean barracks and three meals a day. After two weeks, however, he was transferred to Schlieben. One day the factories of Schlieben were sabotaged and blown up. Godel was fortunate enough to be on the road at the time. Hoping to leave Schleiben, Godel was disappointed when the factories were rebuilt and work started anew. In February 1945 Godel was transported in a cattle car for two weeks. He lost consciousness and woke up in the Theresianstadt ghetto. Godel survived a bout of typhus before being liberated by Russian troops in May 1945. Alone in the world, Godel contracted tuberculosis but was put up by JOINT in a Swiss sanatorium for three years. He eventually left for Australia in 1949.

Godel Wroby’s wartime experiences are recalled clearly and concisely. He does not dwell on the horror that surrounded him, in keeping with his attitude in the camps of, ‘I don’t want to know.’ One can almost hear Godel retelling his story as the style seems more verbal than literary.