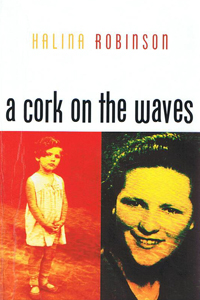 Halina Robinson wrote this autobiography late in life, nearly 60 years after the end of World War II. 311 pages in length, the book is divided into three main sections, preceded by an introduction in which Robinson reflects upon her life in Australia and the process that led to writing the book. The first section of the book, ‘Before the War’ (pages 1-41), tells of young Halina’s childhood in Poland, her complex family life and her friends. Section two, ‘Wartime’ (pages 42-121), describes Halina’s experiences during the war years in hiding. The final, and longest, section of the book, ‘Polish People’s Republic’ (pages 122-307), relates Halina’s life after the war, in Communist Poland, until her relocation to Israel with her husband and daughter. Several relevant maps appear on pages 308-311.

A Cork on the Waves begins with a description of Halina’s childhood in the Polish towns of Przemysl and Kalisz. Halina tells of problems in her family home – problems that as a young child she did not fully understand – that led to her living with her father, and later, with her father and step-mother. She attended a Zionist-leaning Jewish school which educated its students in Polish as well as instructing them in Hebrew and Yiddish. Halina tells of some incidents of anti-Semitism that she came into contact with as a child, but for the most part she presents a picture of good neighbourliness.

On the eve of World War II, Halina moved with her step-mother, step-aunt and step-grandmother to Warsaw. There, following the German invasion of Poland, she witnessed (and experienced) serious poverty for the first time. Halina tells of an occasion when a horse died in the street and her family’s maid ran out to slice a piece of the horse’s meat to bring home to eat, so hard was it to acquire food. Halina’s father was taken away from her early in the war, as a hostage in the ‘Ludwig Kot Affair’. Kot was an underground activist who relayed information to London and then managed to escape from Poland. In response the Germans took dozens of hostages, claiming that they would be killed unless he returned. Halina never saw her father again.

In November 1940, Halina moved into the Warsaw Ghetto. There she remained for nearly two years, narrowly escaping deportation on a number of occasions. In late September 1942, fifteen year old Halina escaped from the ghetto with the help of non-Jewish friends, and went into hiding, taking on the persona of a Polish non-Jewish girl. Living under several pseudonyms and using false documents, Halina found herself living in a Catholic boarding school in Waver, and in the houses of various families; each time her hideout was compromised, she moved on to a new one. Halina heard about the burning down of the Warsaw Ghetto from outside, whilst in hiding in ‘Aryan’ Warsaw. She experienced the Warsaw Uprising inside the city. Finally, in January 1945, liberation came to Warsaw. Her protector at the time, Pani Maryna, took her to the Jewish Agency office to register – so successful was her ‘disguise’ that the official took Halina to be the Polish protector, and Pani Maryna the Jew!

The remainder of A Cork on the Waves describes Halina’s life in post-war Poland, until her emigration together with her first husband and young daughter to Israel. Though she makes mention in her introduction and other places of the fact that they ultimately ended up in Australia, the book does not tell how or when they arrived.

Halina’s style is descriptive yet distant. Clearly much research has gone into ensuring that her book is historically accurate; she also offers insights into particular events and experiences that she is only able to offer because of revelations that came to her after the war. Interestingly and unusually, Halina writes about herself in the third-person, referring to herself as “Lina”; this contributes to the distance that one senses between author and events. As Halina states in her introduction, “Every event described in this book really happened. However, everything has been filtered through Lina’s memory seventy years after her walks in the Kalisz park. Events and backgrounds of the book have been meticulously checked using the most reliable sources. The resultant book reads as a piece of fiction, but it is in fact also a well-researched slice of history.”